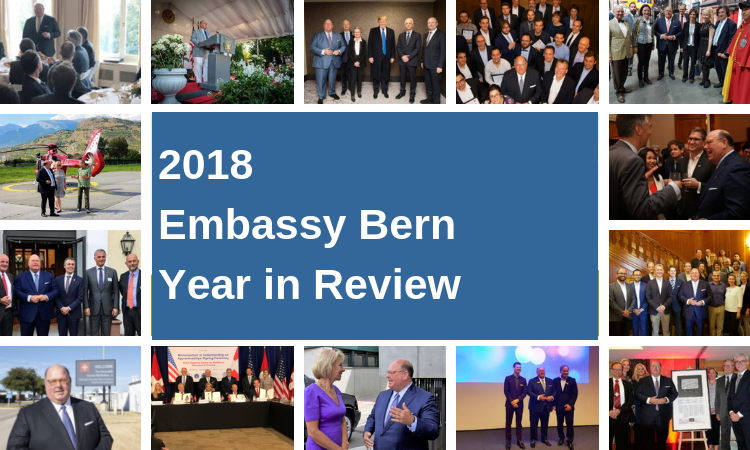 2018 was Ambassador McMullen’s first year in Switzerland, and it was a year full of travelling through nearly every Swiss Canton and meeting people from all walks of life. The year started with a highlight, when President Trump visited the World Economic Forum in Davos. It continued with the Ambassador visiting many Cantons, attending Swiss and Liechtenstein national days, and hosting events with notable guests at his residence in Bern. The year ended with Switzerland and the U.S. signing a Memorandum of Understanding on apprenticeships: a wonderful and symbolic culmination of all the work done in 2018 to further strengthen the bilateral relationship between our two countries.

See for yourself – this is the Embassy Bern year in review, a collection of some of the memorable events in 2018. Click on the images to learn more about each event.

More than a packed house welcomed Ambassador Edward McMullen and his wife Margaret Ann to Switzerland. Ambassador and Mrs. McMullen hosted a reception at their residence for government officials, business representatives, and a variety of people from the arts, universities and cultural institutions. In his remarks, the Ambassador praised Switzerland for its open-mindedness and willingness to dialogue. He looks forward to connecting with the Swiss business community and to discussing the U.S. administration’s foreign policy priorities with diverse audiences. He stressed that the Swiss American relationship is strong and prosperous, underlining the President’s remarks in Davos that  “America First” does not mean “America Alone.”

President Donald Trump attended the World Economic Forum (WEF) in Davos. With that, he was the first U.S. President in 18 years to attend the Forum. Former President Bill Clinton visited WEF back in 2000. Upon his arrival in Davos, he was greeted by Ambassador McMullen, WEF founder Klaus Schwab, Hilde Schwab, Davos Mayor Tarzisius Caviezel and WEF managing board member Alois Zwinggi. The President later delivered a Special Address at the World Economic Forum. The visit to Davos was a great opportunity for President Trump to speak directly to Swiss citizens, politicians, and economic leaders. Presidents Trump and Berset, the Swiss and U.S. Ambassadors, and leaders from both countries participated in a historic meeting in Davos, which created the foundation for future opportunities between our two countries

Ambassador McMullen attended the official opening of the 32nd annual Geneva Book Fair. The city of New York was honored with a special pavilion and an extensive program of activities. With his attendance, Ambassador McMullen emphasized the U.S. interest and engagement in the French-speaking part of Switzerland and to stress the importance of intercultural exchange. There was ample time for him to network with political leaders of the city of Geneva and the Canton of Valais, and peruse the large collection of books related to New York, and the U.S.

May: Celebrating the 10th Anniversary of the Swiss Fulbright Alumni

Ambassador McMullen welcomed Fulbright alumni to celebrate the Swiss Fulbright Alumni Association’s 10th anniversary at the official residence in Bern. The Ambassador recognized Karl Safft, Thomas Heinis, André Kudelski, and Martin Naville for their commitment to the Swiss Fulbright Alumni Association. The honorees and Fulbright alumni were joined by former participants of Embassy and State Department exchange programs. The attendees networked and discussed their experiences and opportunities gained while in the United States.

Ambassador McMullen attended the celebration of ten years of Disney research in Zurich. At the celebration, examples of the successful collaboration between Disney and the Swiss University of Technology, ETH Zurich, were shown. With strong ties to the Computer Graphics lab at ETH, the Disney lab in Zurich is innovating video technology, computational cinematography, human and facial animation. Several Disney representatives from the U.S. were present along with some representatives of the Zurich cantonal and local governments.

U.S. Secretary of Education Betsy DeVos visited Switzerland in June to deliver a keynote address at the third International Congress on Vocational and Professional Education and Training in Winterthur. Ambassador McMullen and Swiss leaders in politics and business  shared with Secretary DeVos the impact and effectiveness of the Swiss apprenticeship model. Secretary DeVos’ visit and interest in learning about the Swiss education  system is a great example of the continued cooperation between the U.S. and Switzerland. Ambassador McMullen, Secretary DeVos, and former Federal Councilor Johann Schneider-Ammann further visited the University of Applied Sciences in Zurich, where they had an in-depth look at some of the University’s programs and were able to learn the importance of apprenticeships to students.

This year we celebrated the 242nd anniversary of American independence. At the Embassy’s Independence Day reception, the Ambassador  welcomed guests from the many arenas of our engagement with Switzerland and Liechtenstein, exemplifying the breadth and strength of our relationship. During his remarks, the Ambassador made clear that on the economic and political level, the relationship between our two countries has never been stronger.

The Ambassador delivered closing remarks at the 5th annual Swiss-U.S. Energy Innovation Days in Sion. He highlighted the fact that both Switzerland and the U.S. are conducting innovative energy research, which presents an opportunity to deepen U.S.-Swiss cooperation on solving 21st century energy challenges. Following the conference, Ambassador McMullen had a bilateral meeting with Valais Economics Minister Christophe Darbellay. To round off a sunny day in Sion, the Ambassador visited Air Glaciers, a Valais aviation company, where he was able to have a look at the helicopters, and toured the Grande Dixence Dam.

September: Economics and the Swiss Canton of Ticino

In Ticino, Ambassador McMullen visited Cerbios; a Swiss company that has been active in the United States since 1982. Later he delivered remarks at the Swiss-American Chamber of Commerce anniversary dinner, hosted by the American School in Switzerland TASIS. The evening guest of honor, Federal Councilor Ignazio Cassis, and the Ambassador both spoke of the importance of the continued strong Swiss/U.S. ties. The Ambassador also visited Franklin University, where he had the opportunity to discuss foreign policy with a group of university students from the U.S. and around the world.

October: The Presentation of the Bundesbrief –  the Swiss Federal Charter

Ambassador and Mrs. McMullen attended a gifting ceremony where he received a framed copy of the Swiss Federal Charter. The Federal Charter is Switzerland’s oldest constitutional document, in which the central Swiss communities Uri, Schwyz and Nidwalden pledged to help each other resist threats of violence and injustice. With this document, they laid the groundwork over 727 years ago for the democratic nation now known as Switzerland. After the U.S. declared independence from Great Britain in 1776, the founding fathers chose to design the U.S. Constitution on the Swiss model of a confederacy devolving power to local authority over stronger federal authority.

The 2018 Venture Leader Alumni Event was hosted at the Ambassador’s residence in Bern. Among the guests were this year’s participants of the Venture Leader program, alumni from previous years, and representatives of the Swiss business and investment communities. Switzerland’s Venture Leaders program is an annual entrepreneurial boot camp and roadshow that took place this year for the 18th time: Three Swiss startup teams of 10 members each went to the U.S. to learn and get inspired with entrepreneurial opportunities to build and grow small business.

December: Signing of the Swiss-U.S. Memorandum of Understanding on Apprenticeships

As one of the most successful and important policy events of the year, Ambassador McMullen joined Ivanka Trump, U.S. Education Secretary DeVos, U.S. Labor Secretary Acosta, U.S. Commerce Secretary Ross, Swiss Economics Minister Johann Schneider-Ammann, and Swiss Ambassador to the U.S. Martin Dahinden for the signing of a Memorandum of Understanding on Apprenticeships in Washington, D.C. Most important were the 22, and growing, Swiss company representatives who joined the group and made a pledge to build upon their current U.S. workforce investment.  The U.S. government is looking to incentivize more apprenticeships and is advancing business and private sector initiatives that can make the workforce more effective and better trained.

Switzerland and the United States are both leaders in science and technology. This is especially true in the aerospace sector. Ambassador McMullen spent a week in the U.S. to visit U.S. defense industry companies across the United States. Each company has important connections to Switzerland. “During my one-week study trip, I visited Boeing, Lockheed Martin, and Raytheon. All three companies set industry standards worldwide with their top-notch technologies,” the Ambassador highlighted.