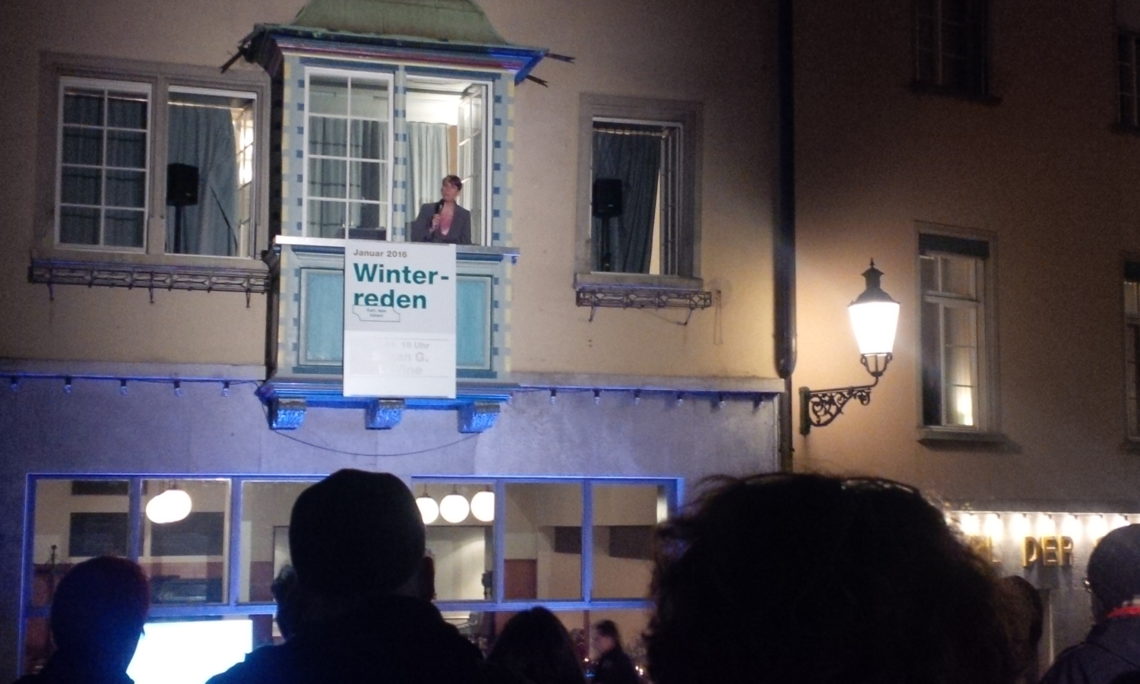 Hope Lives but it Needs Your Help

Oh – sorry – the last time I saw a window and balcony used for an address, it was for Shakespeare….

Thank you so much to the City of Zurich and the Zentrum Karl der Grosse for the honor of having this Window of Opportunity to speak to the Swiss people in this forum and to kick off the Winterrede series.

I believe that in many ways right now is the best time ever to be alive and that, across the globe, people have more opportunities and more personal well-being than they ever have in the history of humanity.

Now – hold on.  I can see the wheels of doubt turning over a few of your heads. Some of you may even be wondering if I’m crazy or just clueless or maybe just an overly optimistic American by making a statement like that. You might be thinking that, if I had seen all of the news or social media posts you’ve seen over the past hours, days, weeks and months, I wouldn’t be saying what I’m saying.

On the contrary – it’s precisely because of that array of news — that firehose of information that we receive — that I’m raising this point.

Please put your hand up if you have used social media in some form over the past week.

Now – please keep your hand up if you agree with me that this is the best time ever to be alive.

Thank you for sharing your thoughts!

Personally – if all I ever did was read my social media streams, I would have a really hard time believing that these are the good times.

We can now consume news and information 24 hours a day, 7 days a week from sources ranging from established journalists in Zurich to student bloggers in the Sudan. This means that we have more visibility to what is happening across the globe. In many ways, that increased visibility also means increased accountability for events that were already happening, but about which no one knew. We can learn about corruption, murders, disease, environmental disasters, migration tragedies and more within seconds of an incident happening almost anywhere on the planet.

Frankly, it would be easy to become paralyzed by fear and depressed about what we learn at any given moment in time. In fact, there are those who choose to capitalize on that fear.

But that short term perspective does not provide the full view of what’s actually happening – and, in many ways, can stifle our progress.

So – I would like to invite you all to do an exercise that will help us get more of that long term view and will provide a view of hope instead of fear.

First – I’d like to ask everyone to please close your eyes.

And on the count of three, take a deep breath with me and – as you breathe out start trying to think about the past 50 years, not the past 5 hours.

Now – you can open your eyes.

Let’s look at the bigger picture.

We are healthier than we have ever been – for example…

We are safer than we’ve ever been

And we are more prosperous and have more opportunity than ever

I believe that, not only can we continue these positive trends – but we can also take on other major global challenges that threaten our safety and our quality of life– especially if we act both together and as individuals.  In fact, I believe that every one of us not only has the ability, but has the responsibility to make sure that those trends continue.

But that concept doesn’t just apply to the United States; it applies to the whole world. I know this first hand because, over my career, I have met young people from New Zealand to Norway and from Senegal to Switzerland who have created solutions to some of the world’s toughest problems. With our profoundly interconnected society – the biggest question is – what can we all do, together, Zusammen, Ensemble, Insieme, to make the world a better place – not just for ourselves for everyone?

Before I share what we, the United States, are prioritizing this coming year in partnership with Switzerland and Liechtenstein, I want to digress for a moment on why it matters to care about others and not just yourself.

While I was a stay-at-home mom in Seattle, I did a lot to make sure that the public schools that my kids attended were excellent. Along with other parent volunteers, I worked hard to make sure the schools were nurturing, educational, and stimulating. But then a story came out about the disparity in the quality of schools in different Seattle neighborhoods and it occurred to me that I had a broader responsibility. I realized that ensuring my kids’ safety and prosperity – which is my main job as a Mom — also meant ensuring that all kids have a strong start. I recognized that, if those other schools and kids excelled more, our whole community would prosper, including my own kids.  In other words – a rising tide lifts all boats.

That concept pertains to more than just my kids and their school system. It pertains to every community in the world, and it pertains directly to the relationship between the United States and Switzerland – as well as the United States and Liechtenstein.  We recognize and act on our responsibility to work together, not only on challenges facing our two countries, but on those challenges facing our global community.

This coming year, three of the key global challenges and opportunities on which we will collaborate in order to raise those boats include:

That gives you a sense of what the governments will do, but as I said before, every person can have an impact and make a difference – and the support needed for these priorities is no different.

And here in Switzerland, with the power of the blended Direct and Representative Democracy, every person – every one of you — has even more impact than in most places in the world!

So whether it’s helping further those positive trends I shared before around areas such as improving global health, increasing economic well-being, reducing crime, and fostering peace or whether it’s taking on global challenges and opportunities, we need your help!

As you walk away from this beautiful platz – I want to leave you with three calls to action on how everyone of you can make an impact. And to make it easy to remember – think of these as the three Vs (V for Victory):

2)     Volunteer – a friend of mine shared a story the other day about how, each Wednesday, she goes to her church near Bern to teach language to refugees. While she’s impacting their lives, they are also impacting hers. And in speaking with the Mayor of Nendaz, I was moved by the story he told where the whole community brought food to a new refugee family and now that family feels like they are a part of the community instead of feeling isolated. That family then becomes a contributing part of that community.

3)     Voice – A powerful characteristic for each of our nations is the protection of every individual’s voice. Every one of us has the legal protection and right to stand up for what we know is right. But with that, comes the responsibility and accountability to also make sure that what we’re sharing is grounded in truth. That said – I believe it is just as important to listen as it is to speak out!

With your help and with the deep partnerships we have with the Swiss and Liechtenstein governments, I have a deep sense of hope for our citizens and for our world and I predict that 2016 will be a truly incredible year – even better than 2015!

And I know that that this is the best time ever to be alive!

[i] Food and Agriculture Organization of the UN