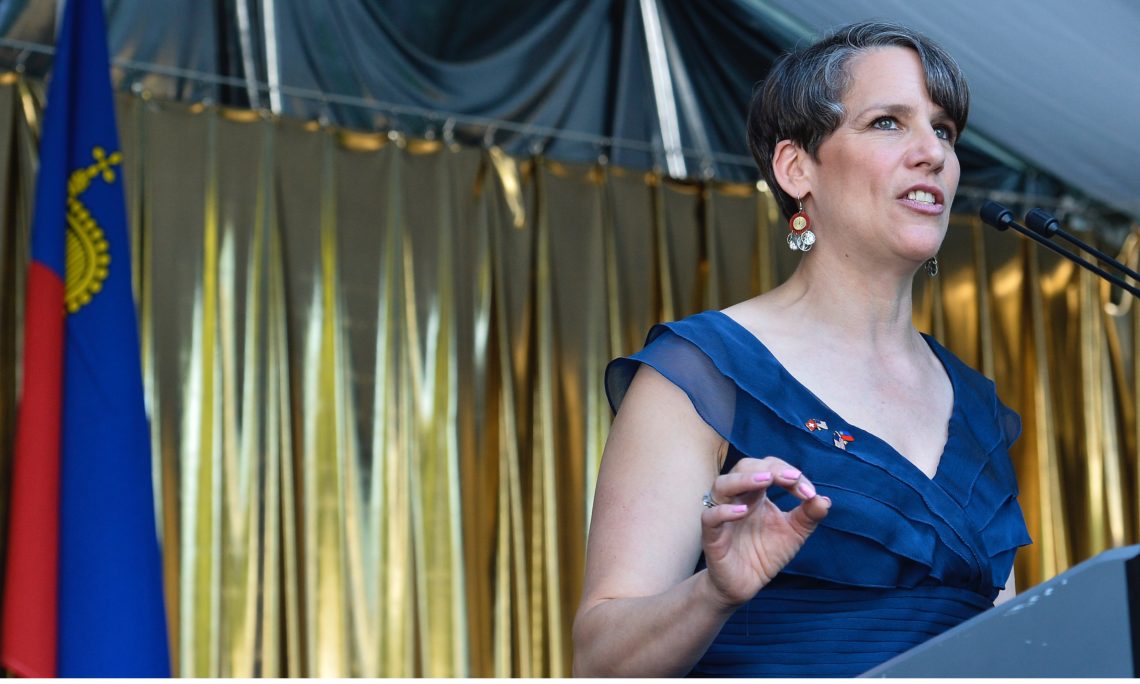 Now that I have delivered my credentials to Prince Alois of Liechtenstein last week and President Burkhalter here two days ago, I can welcome you to the Residence in my official capacity as the US Ambassador to Switzerland and Liechtenstein.  I especially welcome Ambassador Guex and Ambassador Frick.

Before anything, I have to say that we were all looking forward to a Swiss-U.S quarterfinal, but that wasn’t meant to be. I congratulate the Swiss and U.S. teams on their performance – and for creating so much excitement. Kopf Hoch!

Thank you to our outstanding corporate sponsors without whose generosity this event would not have been possible.  Thank you, also, to the Embassy and Residence staffs for all their support, and finally thanks to all of you who are joining us from all over Switzerland and Liechtenstein.

I remember exactly 26 years ago tomorrow when I departed New York en route to Zurich for my first trip to Switzerland.  It was early evening on July 4th and the whole US coastline was ablaze with fireworks! It felt strangely symbolic to be leaving the United States on Independence Day. Since then, I’ve celebrated Independence Day from coast to coast – from New Jersey to California, from Utah to Washington State and, I’ll tell you, even though our nation is getting older, the joyousness of this holiday never gets old!

Celebrating the anniversary of our democracy here in Switzerland gives us the perfect opportunity to not just commemorate the birthday of the United States, but to reflect on and celebrate the relationship between two of the oldest federal Republics in the world – a relationship almost 200 years old.

Have you heard the phrase “Sister Republics” before?  The question is:  what does it really mean?  How do we not just pay lip service to that phrase but, rather, deeply embrace our connection so that we can better help our citizens and our world?

Just as a reminder, we were called “Sister Republics” because we were among the few democratic systems in a world dominated by monarchies and the Swiss based their constitution on the US constitution.  This led to similar structures such as our bicameral legislatures and the separation between federal vs. state/cantonal jurisdiction.  Over time, we have both had to grow and adapt our respective systems to deal with an ever-changing world and, through it all, we continue to share a respect for the Rule of Law, a respect for minority views, and an emphasis on individual liberties.  While living up to those principles is not always easy, as Sister Republics we share the same DNA and have a special bond that sets a solid foundation for respectful dialogue and cooperation that doesn’t exist with other countries.  And at a time when so much is happening around the globe to imperil and eliminate those rights, it is especially critical that we recognize, honor, and highlight the protections our countries have.

Now, please raise your hand if you have a brother or sister? And if you have, have you always had a perfect and trouble-free relationship?  I am the youngest of four – with 2 brothers and a sister and, I’ll tell you, we certainly have some areas on which we’re working – but we always know we can rely on our foundational bond filled with unconditional love.

I believe that – especially as Sister Republics and especially on this day when we are celebrating independence and democracy – it’s critical that, while we work on areas where we face challenges, we remember what is great about our relationship – and that we work to strengthen and enhance those areas.

Let me share with you just a few examples of what is great in our relationship that, I believe, merit strengthening and attention:

Honored guests, I do not believe I am exaggerating when I say that we have never had so many different threats to human freedom occurring around the globe and so many opportunities to make progress in our efforts to make the world a better place.

Our relationship needs to be about trust, partnership and respect.  The opportunities we have before us and the challenges we face in our world today are far too big for us to address alone and, in this increasingly small, inter-connected world, we, as Sister Republics, need to take on those opportunities and challenges together!

So here’s my call to action for you – because this is a team effort.  The next time you’re having a conversation about our relationship – please remember the deeper meaning of Sister Republics and share not just what needs some work – but also what makes it great and fundamentally makes us stronger.