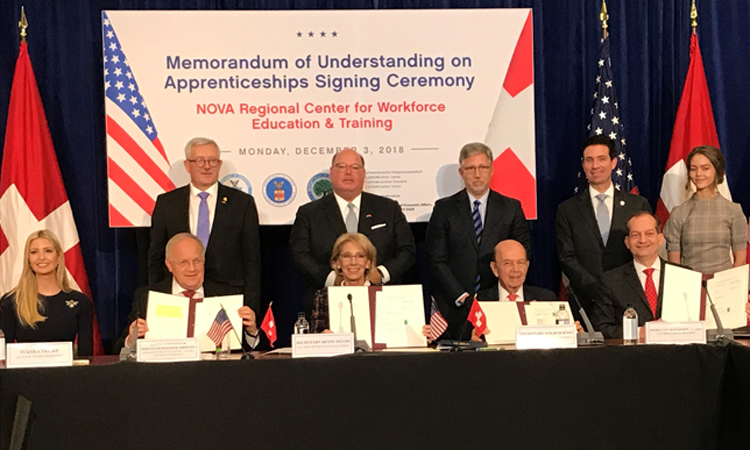 On December 3, 2018 Ambassador Edward T. McMullen, Jr. was pleased to join Ivanka Trump, U.S. Education Secretary DeVos, U.S. Labor Secretary Acosta, U.S. Commerce Secretary Ross, Swiss Economics Minister Johann Schneider-Ammann, and Swiss Ambassador to the U.S. Martin Dahinden for the signing of a Memorandum of Understanding (MoU) on Apprenticeships in Washington, D.C. Apprenticeships are not common in the States (yet). The U.S. government is looking to create more apprenticeships and is thankful for partners like Switzerland who have many insights to share in the area of vocational education.

With Secs DeVos, Ross & Acosta & Swiss officials for the signing of the MOU that will encourage Swiss companies to invest in America’s workers!
Thank you to the 20+ Swiss companies that signed our #PledgeToAmericasWorkers & created NEW opportunities for 40,000+ Americans! 🇺🇸 🇨🇭 pic.twitter.com/qQkImEIWcy

In addition to the MOU signing, more than 20 Swiss companies signed a pledge to provide job training to 40,000+ American workers. The program is part of the President’s Pledge to America’s Workers, which asks companies to commit to expand programs that educate, train, and reskill American workers from high-school age to near-retirement.

Pleased to join @IvankaTrump, @BetsyDeVosED, @SecretaryAcosta and Swiss Economics Minister @_BR_JSA at today’s MOU signing on #apprenticeships. This agreement provides an opportunity for the U.S. to apply on a broad scale the best practices from the Swiss apprenticeship system. pic.twitter.com/4BdSUrsKAb