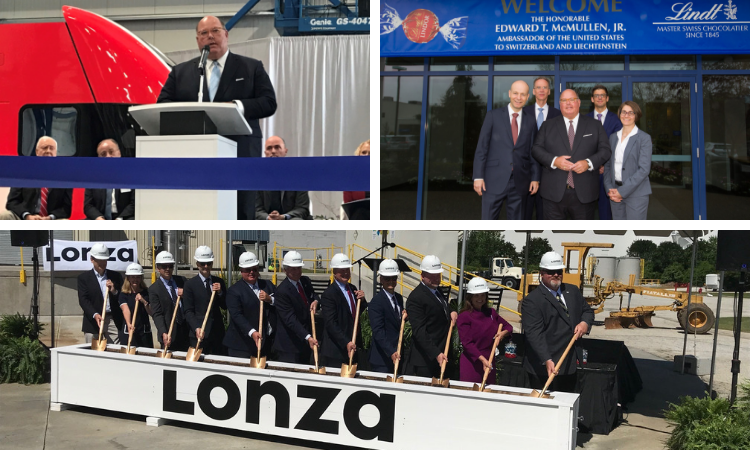 As a first stop, Stadler Rail Executive Chairman Peter Spuhler and CEO USA Martin Ritter hosted Ambassador McMullen at its state-of-the-art facility in Salt Lake City for Stadler Rail’s Grand Opening/Ribbon Cutting event on May 9.  The Ribbon Cutting event was an opportunity to amplify Swiss investment as the catalyst for a new wave of transportation manufacturing in Utah.  After 15 years of doing business in the United States, Stadler Rail broke ground in October 2017 and the construction of the new factory in Utah started in March 2018.  The overall initial investment for the development and construction of a new facility was $50 million, but the direct economic impact to the state is well in excess of that $50 million.  Currently, Stadler US has 200 employees, which will grow significantly as Stadler Rail further develops the U.S. market.  Ambassador McMullen also met with the leadership of the Salt Lake City Community College to learn about local efforts to implement a vocational education program with Stadler Rail, which will begin in July 2019.  As one of the 30 Swiss companies that pledged to implement a vocational education program at its U.S. facilities, Stadler US has partnered with Salt Lake Community College and the Salt Lake School District to develop a vocational training program based on the Swiss apprenticeship model.

As a second stop, Ambassador McMullen and Mr. Galambos visited Greenwood, South Carolina on May 13 to celebrate the progress of a $46 million expansion at Lonza.  Announced in May 2018, the project will add over 30 jobs and 50,000 square feet to the company’s campus.  The May event marked the ceremonial groundbreaking of the project’s second phase.  Governor McMaster announced that in just under two years, the state has attracted more than 26,000 new jobs and over $8.2 billion in capital investment.  During an afternoon question-and-answer session, Ambassador McMullen spoke to a room full of Lonza employees about the economic impact Swiss companies have on the U.S. market and highlighted his priorities as U.S. Ambassador to Switzerland and Liechtenstein.

As the third and final stop, Ambassador McMullen and Mr. Galambos met with the leadership of Lindt & Sprüngli at the Stratham, New Hampshire facility.  Lindt & Sprüngli, one of the few global companies in the world to produce chocolate from bean to bar, announced in 2018 that it will make an investment over $200 million to expand its chocolate production facility at Stratham.  New high-tech production lines will be added at the plant in the upcoming years, significantly increasing capacity and setting the company up for the strong continued growth expected in the U.S. market in the future. Once completed, the expansion will create approximately 200 new jobs.

With Switzerland as the 7th largest foreign direct investor in the United States and a cumulative direct investment of $202 billion, significant business and innovation ties continue to underpin mutual prosperity between Switzerland and the United States.  Swiss companies are represented in all 50 states, employ close to 480,000 American workers, and offer high salaries.