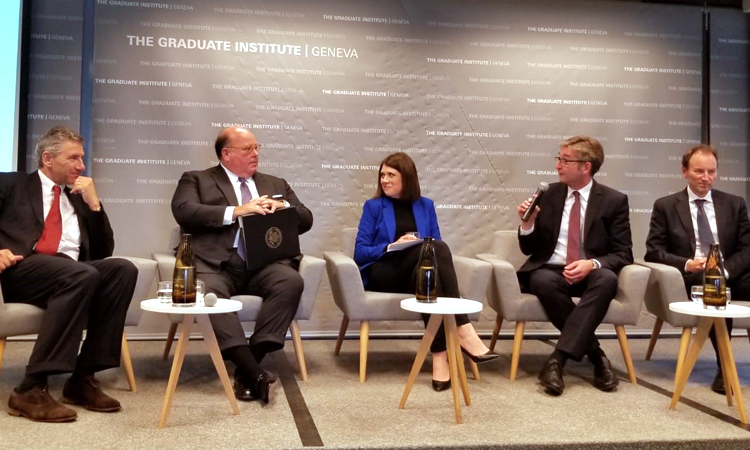 On April 4 Ambassador McMullen engaged in a public discussion on the trade relations between Switzerland and the United States at the Graduate Institute in Geneva. The event was organized by Foraus Foreign Policy think tank, for with support of the U.S. Embassy in Bern. The discussion focused on the challenges and opportunities for mutual trade and investment and the status of the current discussions on a bilateral trade agreement between the two countries.  Ambassador McMullen reiterated how Switzerland is a wonderful trading partner. He is confident that we can find common ground based on our mutual beliefs in the principles of freedom, fairness and reciprocity. The likeminded approach to economic freedom, trade, and entrepreneurship creates opportunities to deepen trade ties and stimulate mutual investments.

Other members of the panel were Ambassador Markus Schlagenhof, Chief of SECO’s World Trade Division and Delegate of the Federal Council for Trade Agreements; Professor Cedric Dupont Professor of Political Science at the Centre for Trade and Economic Integration at the Graduate Institute of Geneva; and François Gabella, Member of Switzerland Global Enterprise’s Advisory Board. Other points of discussion were trade relations with China, the future of the WTO, and the role of the agricultural lobby in trade agreements. The evening was moderated by Hannah Wise of CNN Money.