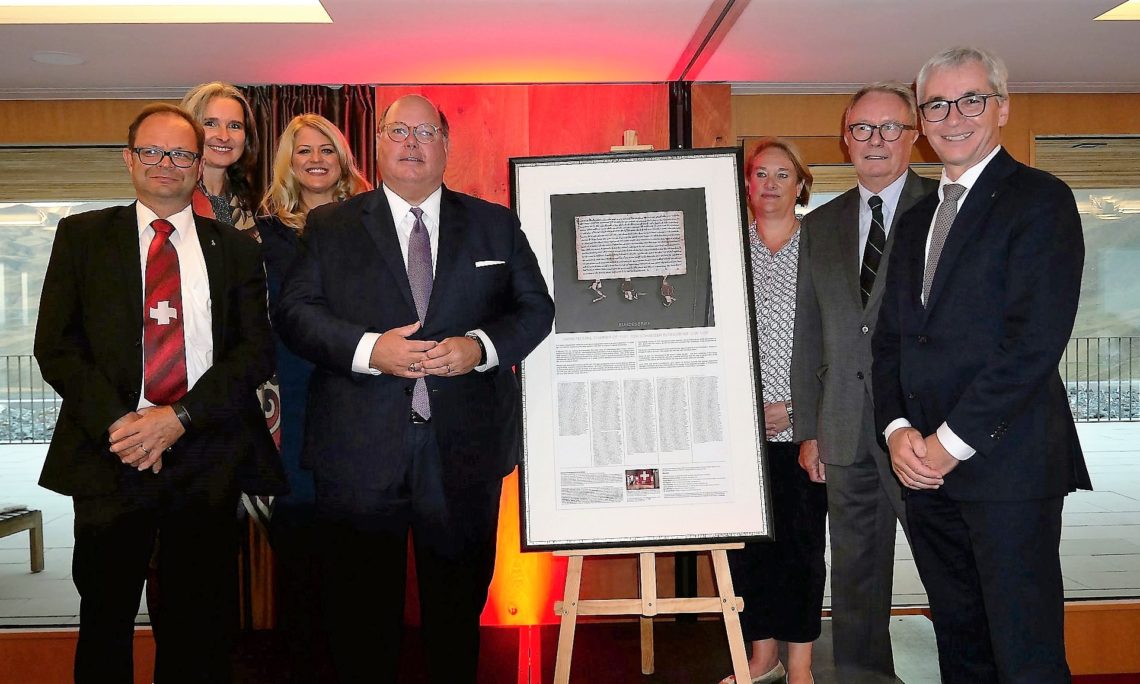 On October 18, Ambassador McMullen attended a gifting ceremony in the Swiss mountain village Melchsee-Frutt, where he received a framed copy of the Swiss Federal Charter. The Federal Charter is Switzerland’s oldest constitutional document, in which the central Swiss communities Uri, Schwyz and Nidwalden pledged to help each other resist threats of violence and injustice. With this document, they laid the groundwork over 727 years ago for the democratic nation now known as Switzerland.

The event was organized by the International Bundesbrief Society, which was founded on the date of the first-ever departure of the Swiss Federal Charter from Switzerland to the National Constitution Center in Philadelphia, PA. There, it was put on display as the star of an exhibition called “Sister Republics,” which highlighted the strong relationship between Switzerland and the U.S. and the values we share.

Interesting fact: After the U.S. declared independence from Great Britain in 1776, the founding fathers chose to design the U.S. Constitution on the Swiss model of a confederacy over sovereign States. Less than a century later, when the Swiss adopted their constitution, they picked the U.S. Constitution as a model. No wonder two of the oldest democracies in the world have so much in common!

During his remarks at the ceremony, Ambassador McMullen pointed out that the close ties between the U.S. and Switzerland rest upon our shared foundational values of democracy, good governance, and free commerce.

A Prominent Spot in the Embassy

The event was attended by various Swiss federal and local government officials, business leaders and civil society representatives. The former Swiss Ambassador to the United States, Urs Ziswiler, welcomed the Ambassador and the guests. Afterwards, Susanna Auf der Maur, a member of the Swiss-American Society of Lucerne, presented the Ambassador with a copy of the Charter in the name of the International Bundesbrief Society.

As reported by the Luzerner Zeitung, the Society has made it a tradition to give a copy of this historic Swiss document to all new U.S. Ambassadors in Bern, as a symbol of the connection between the two countries. Honoring its historic importance, the Ambassador has decided to give the framed copy of the Charter a prominent spot in the Embassy.