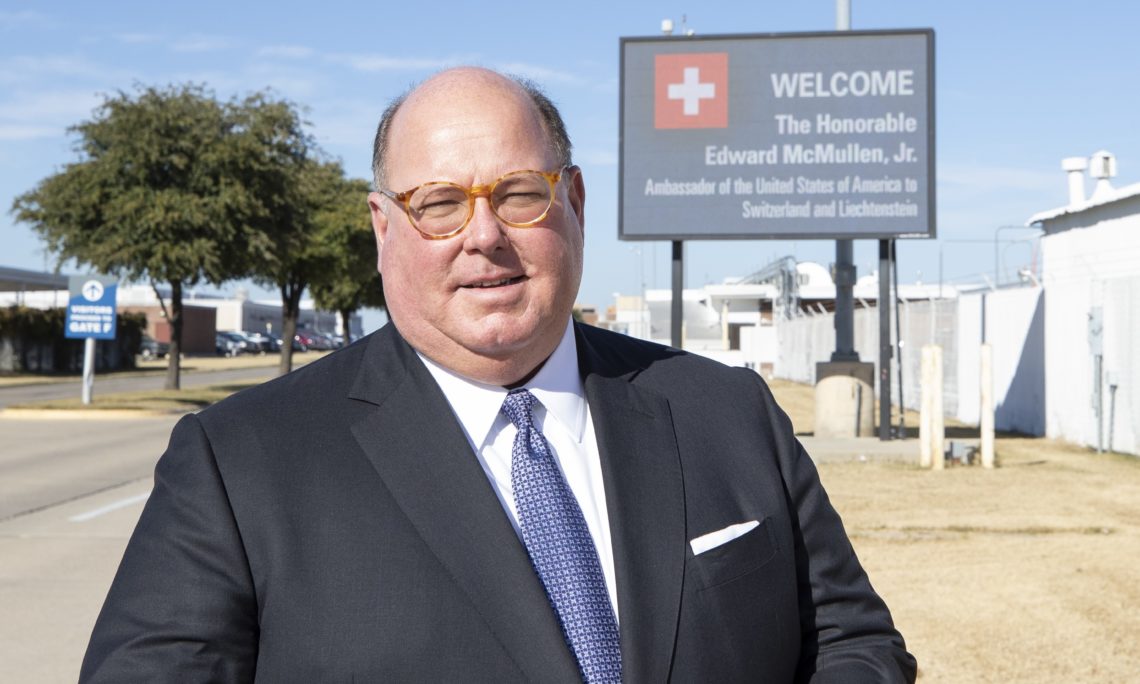 Ambassador McMullen just returned from the United States, where he visited U.S. aerospace companies with deep historical and long-lasting ties to Switzerland.

Switzerland and the United States are both leaders in science and technology. This is especially true in the aerospace sector! Ambassador McMullen went to the U.S. to visit U.S. defense industry companies across the United States. Each company has important connections to Switzerland.

At the Boeing facility in Berkeley, Missouri, the Ambassador enjoyed a tour through the jet-manufacturing site. This site is where the company assembles the F-18 Super Hornet, which is the jet the U.S. Navy flies. It may look familiar to Swiss, as the Swiss army currently uses an older version of the same plane!

The Ambassador’s program also included Fort Worth, Texas, where Lockheed Martin has a large manufacturing plant. The Ambassador had a close-up look at an assembled F-35 jet, which was even more impressive up close. In addition to planes, Lockheed built the lander for the NASA InSight Mars Mission that carries a Swiss seismometer.

From the Mid-West to the Northeast, Ambassador McMullen visited Andover, Massachusetts, where Raytheon builds specialized defense solutions. The Ambassador learned about the company’s latest technologies, including the Patriot ground to air defense system. Raytheon supplied the Swiss radar system for military and civil aviation and currently has a contract with RUAG to service the advanced digital radar warning receiver for the Swiss government.

In addition to the company visits, Ambassador McMullen traveled to the U.S. Army’s Training Center in Fort Sill, Oklahoma. He met with members of the U.S. military to learn about the artillery school and its activities. He even saw an air defense system in action, watching a live-fire training exercise as soldiers tested the Patriot defense system.