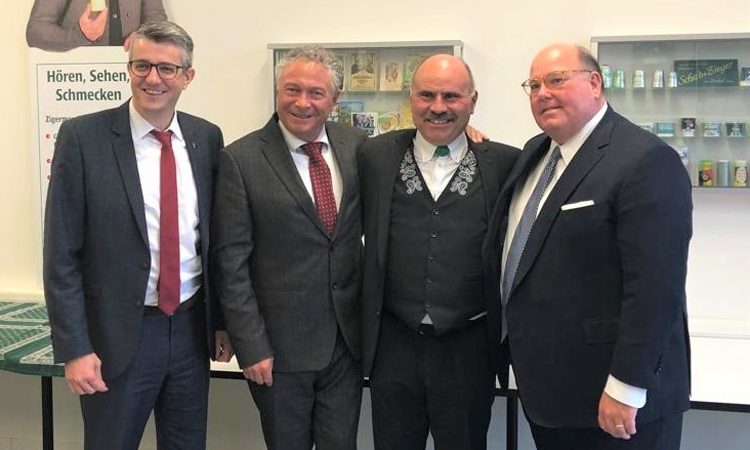 Ambassador McMullen travels through Switzerland to get a fist-hand insight of regions, cultures, businesses and people – and their connections to the United States. His most recent trip took him to central Switzerland, where he visited the Canton of Glarus for a day.

Glarus Businesses with Investment in the United States

The first visit of the day brought Ambassador McMullen to Swiss chocolate manufacturer Läderach. The company’s story began in the early 1960s in Glarus, when Rudolf Läderach Jr. began to experiment with chocolate in his cellar. Today, the company has shops across the globe, including the United States. Läderach recently opened a store in New York City, and further stores are planned to open this spring. The Läderach family took Ambassador McMullen on a tour of the factory; all Läderach chocolates are handcrafted, and Ambassador McMullen was able to see the production of Easter chocolate bunnies up close.

On his next stop, Ambassador McMullen visited Schabziger manufacturer Geska. Schabziger is a traditional cheese exclusively produced in the Canton of Glarus that dates back more than 500 years. It is made out of skimmed cow milk and a special kind of herb. The resulting cheese is hard, green with a strong flavor. Geska CEO Hermann Luchsinger provided an overview of the cheese factory and its distribution channels in Switzerland and around the world.

The Ambassador enjoyed getting a tour of the Kunsthaus Glarus by Director Judith Welter. She gave him and insight into the current exhibition and the architecture of the building. The current exhibition features artwork from two Glarus artists, who created a series of works after visiting Greenland. A previous exhibit focused on U.S. artist Sam Pulitzer; the Embassy supported the Kunsthaus with a small grant for that exhibition. As part of the tour, the Ambassador got to see the storage of the Kunsthaus, which has a unique concept: It is regularly open to the public, and the museum offers specialized tours to highlight specific artworks that are rarely exhibited.

Ambassador McMullen was able to meet and have lunch with representatives of the Glarus cantonal government, who told him about the thriving economy and unique political practices. Glarus is one of two Swiss cantons that still holds an annual open-air assembly in which citizens can vote on proposals in person. The “Landsgemeinde,” one of the oldest forms of direct democracy, practiced in Glarus for 727 years, is held each year at the first weekend of May. All eligible citizens over 16 years of age legally resident in Glarus are invited to vote on the laws and expenditures of their canton.

More about the visit in the article on the Glarus news platform glarus24.ch: “Wichtiger Besuch bei zwei Glarner Unternehmen“