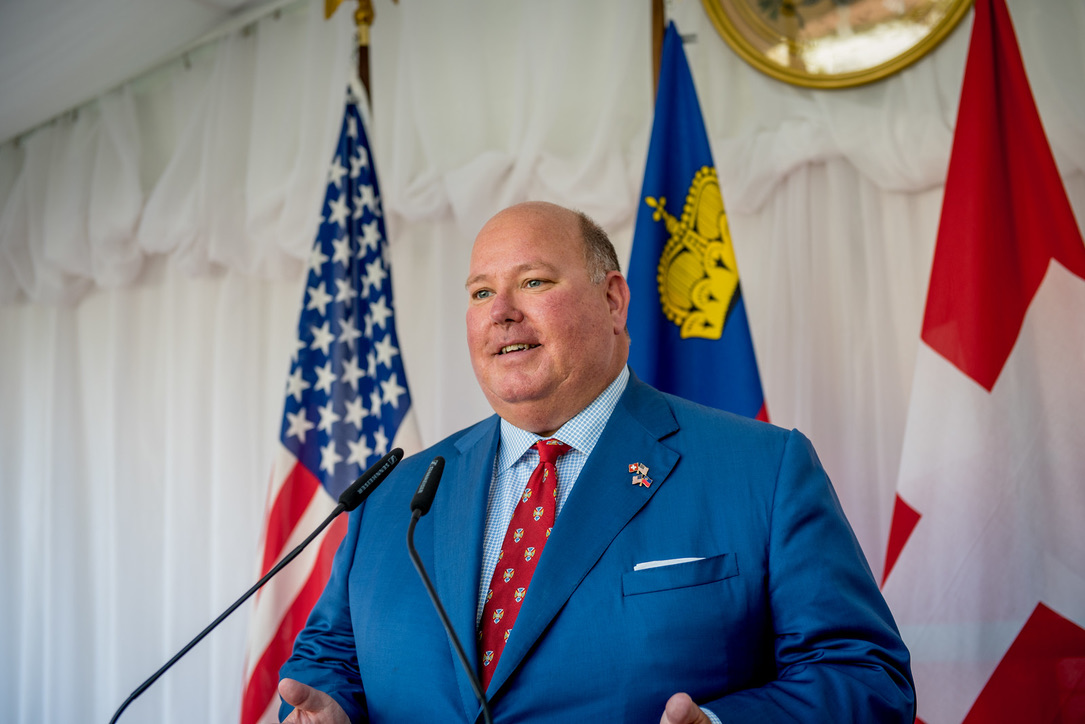 Thank you all so much for joining us today to celebrate the 243rd anniversary of American independence. We are so pleased to welcome guests from the many parts of our engagement with Switzerland and Liechtenstein, exemplifying the breadth and strength of our relationship.

I want to thank the many people who worked so hard to make this event happen, particularly our event co-chairs, as well as the dozens of Embassy and Residence staff, our chef and his team, and the groundsman who creates the beautiful oasis of this garden.

I would like to recognize the American, Swiss, and Liechtenstein companies who contributed to our celebration today. We very much appreciate their generosity. Their names and companies are on the signboard on the Residence grounds today.

As the United States Ambassador to Switzerland and Liechtenstein, I am honored to represent the President and the people of the United States in a country where Margaret Ann and I have traveled extensively and have so many longstanding and new friendships. Our Embassy team and the administration have worked hard to make our relationship stronger than ever. Just two months ago, for the first time in history, a U.S. President, President Trump, hosted the Swiss President, President Mauer, in the White House Oval Office, to discuss our deepening economic and sister republic ties.

Following this historic meeting, Secretary of State Mike Pompeo came to Switzerland to meet with Foreign Minister Ignazio Cassis – the first official visit of a U.S. Secretary of State to Bern in over two decades and the first to Ticino ever. Over that weekend, Secretary Pompeo and I had the honor of visiting the German, French, and Italian speaking regions of Switzerland.

So, why the all the attention? I’ll tell you. It is because the United States recognizes Switzerland as the diamond in Europe that she is – economically, culturally, and as the trusted partner in good offices.

Over a year ago President Trump and President Berset met in Davos and agreed to focus on strengthening Swiss-U.S. relations. In December, then Swiss Economic Minister Johann Schneider-Ammann traveled to the U.S. to discuss trade, paving the way for current Swiss Economics Minister Guy Parmelin to continue discussions with U.S. Trade Representative Robert Lighthizer in April. Foreign Minister Ignazio Cassis and Secretary of State Pompeo have already met twice this year and discussed the trade potential, once in February and of course during the bilateral meeting in Ticino in June.

And then there’s the Presidential meeting at the White House in May. Where Presidents Maurer and Trump both recognized all the good a trade deal would do. In fact, just last week we had U.S. trade officials meeting with Swiss counterparts here in Bern. So this ball is rolling and I look forward with great enthusiasm and optimism to seeing our combined efforts come to fruition.

And I’m also proud to say, that in December, Advisor to the President, Ivanka Trump was joined by U.S. Commerce, Labor, and Education Secretaries along with Swiss Economics Secretary Johann Schneider-Ammann and Swiss Ambassador Martin Dahinden and several Swiss CEOs to sign a Memorandum of Understanding promoting opportunities for Swiss companies to invest in American workers through Swiss style apprenticeships. Today, our mutual investments are poised to deliver even better inventions, solutions, and jobs for the American and Swiss people, and the world.

And while that is an important story, the larger story is that our countries clearly share central principles — a commitment to competitiveness, longstanding traditions of innovation, and an entrepreneurial spirit. These are underpinned by deeply rooted common values of democracy, decentralized power, and individual responsibility – longstanding principles that have withstood the test of time and modern history.

I am truly honored as U.S. Ambassador to Switzerland and Liechtenstein to work with our colleagues in business, government, academia, and society to ensure that our robust partnership continues to grow and strengthen the vitality of our great nations. With both our countries focused on policies and partnerships that enhance our economic security and prosperity, my optimism inspires me and I am encouraged that we will have an impact domestically, bilaterally and internationally.

All of you here today play important roles in this, and I would like to thank you all for helping to make our relationship strong, deep, and enduring. Relationships like ours ensure our nations will continue to be prosperous and safe in the years to come.

Speaking of prosperity – the variety of climates and cultures in the United States means that we have some really incredible and unique food, wines and spirits. For those of you who have already traveled to the United States and sampled Carolina BBQ or California cabernets or enjoyed engaging in the eternal debate of the better pizza – New York or Chicago style – you know exactly what I mean.

Many of you know that I grew up in New York and spent most of my adult life in South Carolina. And the staff at the Embassy come from every other corner of the United States. So for this Fourth of July celebration in Bern, we are excited to bring a sampling of American cuisines from several of our plentiful regions, so you, our Swiss and Liechtenstein friends, can share in America’s Bounty.

So please, relax, eat, drink, and enjoy the music and company. Thank you all for your friendship and another great year – and Happy Independence Day!