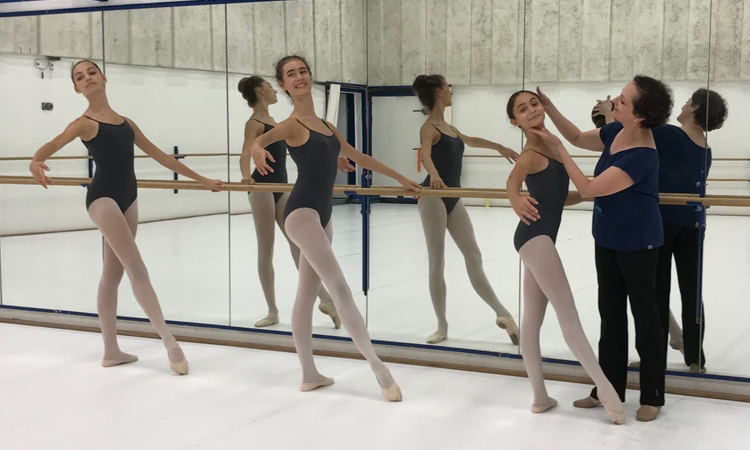 We visited the Ballet School Theater Basel and got an in depth look at ballet education in Switzerland. Our host was the Texas-born director of the school, Amanda Bennett. Basel has played an important role in Amanda’s career. From 1978 to 1989, she fascinated audiences as the principal dancer under the leadership of Heinz Spoerli. Since 2001, she has led the ballet school at Theater Basel with a great deal of dedication, decisiveness and endurance and has transformed the school into an internationally renowned training center.

“Being the director of a professional ballet school is challenging and interesting at the same,” explains Amanda. “It involves many different things. One has to be able to deal with budgets, fund raising, teaching, recruiting new students, planning, and of course dealing on a personal level with all of the students and parents. This élite school in Basel is also a Partner School to the internationally renowned Prix de Lausanne.  Amanda knows the Prix de Lausanne very well, as she was the Artistic Director of the Prix from 2012 – 2016.

Amanda is well connected in the international dance world. She often travels to the U.S. professionally to collaborate on projects such as student or teacher exchanges.  She loves to say, “Dance knows no boundaries!” Although at home in Europe for decades, she still thinks of going back to the U.S., “This is the constant question. I would actually love to be able to live half the time in the U.S. and half the time in Switzerland.”

Amanda Bennett was born in Texas and spent a few years in Jackson, Mississippi before she moved to New York to study at the School of American Ballet, the school of George Balanchine and the New York City Ballet. In 1976, she signed her first contract as a dancer with the Grand Theatre de Genève.

Why Switzerland? “The Swiss tradition of dance is not as old as in France, but since the 1950’s, there have been some very important companies in Switzerland.  Actually, I settled here because of Balanchine’s company in Geneva and Spoerli’s company in Basel.” When Amanda stopped performing, she did not step foot into a theater for more than a year and swore that she would never teach.  Never say never! Today she is leading one of most prestigious ballet schools in Europe.

Without Amanda, we would not have found our way around Theater Basel.  Luckily, she knows every nook and cranny.  First, we visit the boys’ classes and then the girls’. The training is arduous. The teachers are fine-tuning the student’s jumps and pirouettes. Anyone aspiring to a ballet career not only has to be physically strong, but also has to have a good dose of stamina and discipline–qualities and skills that Amanda knows how to use well as a ballet mistress and as the director of the Ballet School Theater Basel.

Thus, it is not surprising when she tells us her ultimate goal is to, “Develop the school into the highest level professional school in Europe.”