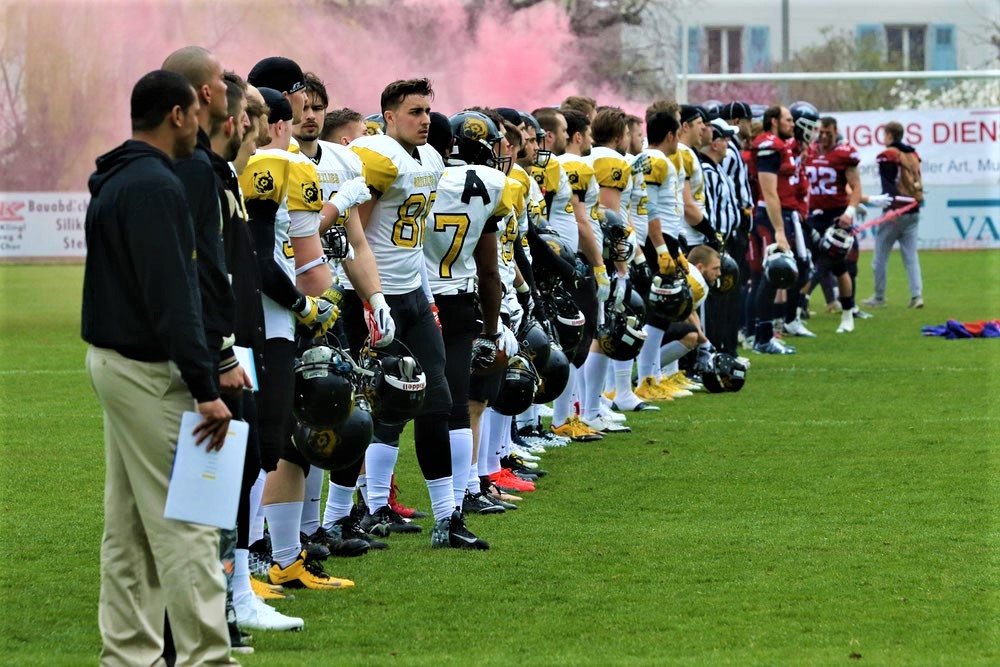 Darius Willis grew up in Indianapolis, Indiana and is the head coach of the Bern Grizzlies – the football team of Switzerland’s capital city. Surprised to find out that football is a thing in Switzerland? So were we! We talked to Darius about his love for American football and how the sport is becoming more popular in Switzerland.

What fascinates you about American football?

To me football is the greatest team sport there is. Football provided me a life away from poverty. It taught me how to develop and grow as a young man and it still teaches me. There is no better feeling than being out there on the field with your teammates working together to achieve the same goal.

Tell us about the Bern Grizzlies!

The Bern Grizzlies have three teams that consist of: U16, U19, and Seniors. We are developing a flag program so that we can be involved with a younger age group and get them interested in our sport. Anyone can attend our games. We play at the Wankdorf Sporthalle normally on Sunday mornings for youth and afternoon for seniors. If you want to see the Bern Grizzlies play, here is the schedule for their season: Grizzlies schedule.

What’s your job as the head coach?

I plan and organize all the trainings year-round, even summer training programs for strength and conditioning. I create events so that we can build our image here in the community of Bern. I am in charge of recruiting new players, and for our senior program I even import players from the U.S. and other European countries. I also do outreach to find partnerships within the community.

What I love about the job is being able to teach and enjoy time with the players. Not only do I try to develop them on the field, but I try to share my knowledge and experiences to help them off the field as well. It is not easy to be a football coach in this country, especially when no one considers it a “job.” But I am always up for the task and love what I do. I get to share my passion with the players of Switzerland. To see young people in this country look up to me as a role model makes me want to do whatever I can to help them succeed.

What do you tell Swiss people who don’t know a lot about football?

For people that do not know the sport I just let them know that it does exist here! I invite them to come see a training or a game. Most people have viewed it on TV but do not find it interesting because they do not know the rules. So, I let them know that football games are the best action! I think we are the biggest up-and-coming sport in Switzerland and people should start to catch on. The game atmosphere is awesome. For those that wish to play it is a bit different: I make sure they attend our rookie tryouts, this is where they can come practice and learn every position for three weeks in November.

Back in the Sates I watch with a big group of family and friends and we grill and order pizza. Here in Switzerland I normally watch the game in Zürich as I meet up with other Americans there. This year we decided to reserve a spot at Hooters restaurant so that we can enjoy plenty of good food and make it feel more like back home.

Darius Willis started playing football at a young age, with older kids in his neighborhood. The passion stayed with him: he played at his high school in Indianapolis, and later was the starting runningback at Indiana University. After suffering a knee injury, he decided to stop playing and focus on graduating with a Bachelors in Nonprofit Management. After graduation, Darius decided he wanted to make a comeback and tried out for various teams. He got invited to the New York jets rookie camp but did not end up making the team. He knew he wanted to continue playing, which is why he followed the advice of a friend who told him to go overseas to continue his passion. This is how he came to Switzerland in the summer of 2014. Initially he was only here for a few months but soon became fascinated by the nature and people he was surrounded with.