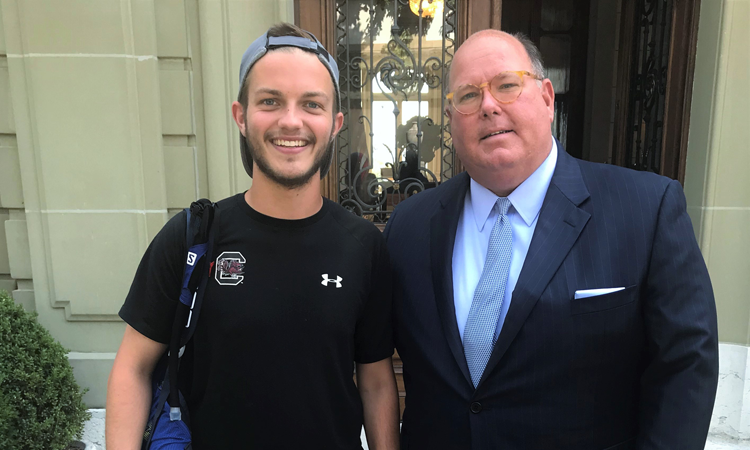 Ambassador McMullen met American Jack Bowling, who is running across Switzerland for charity, at the U.S. residence in Bern.

Jack Bowling, a graduate of the University of South Carolina, is running across Switzerland to benefit the Ulman Cancer Fund for Young Adults (UCF) based in Baltimore, Maryland. Having run across the United States in the summer of 2016 for the same charity alongside a team of 26 others, and having studied for a semester on exchange at the Universität St. Gallen, he came up with the trans-country idea to benefit this great organization once again. On day 7 of 8, he stopped by the Embassy of the United States to meet a friend of a friend: Ambassador McMullen.

“Cancer, a dark and daunting topic, comes with a silver lining: the uniting of families and strangers alike, whether across towns, cities, countries, continents, or more. I hope, through this silver lining, we can see two things: that unification can emerge in the face of this despicable disease & that cancer survivors do NOT need to fight alone. Cancer changes lives, but so do we.” – Jack Bowling

After a quick lunch of meatballs and bananas at the Ambassador’s home, Jack was off for the last day of his run to Geneva.