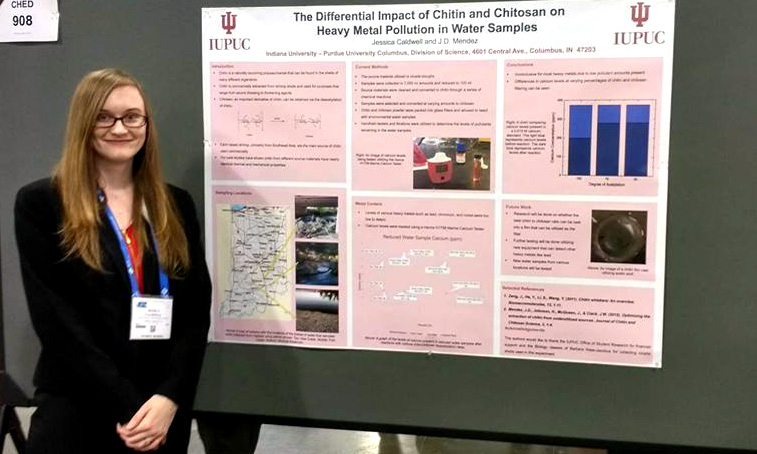 Jessica Caldwell, a native Hoosier (colloquial tern for a resident of the State of Indiana) came to Switzerland in September of last year for a Master’s degree program at the Adolphe Merkle Institute in Fribourg which offers a broad array of programs with specialties in biology, physics, chemistry, chemical engineering and more.  She met with one of our U.S. Embassy officers via Skype to tell us more about her research and her impressions of living in Switzerland.

Q: Can you tell me why you decided to study in Switzerland, Jessica?

A: While pursuing my bachelor’s degree at the Indiana University-Perdue University Columbus, I studied biopolymers–specifically chitin, which is a material found in crab shells and insect shells.  It is a structural polymer for strength.  The professor under whom I studied actually had come here to the Adolphe Merkle Institute to finish his PhD.  Therefore, he knew several people here and told me about their material science program, which had been my research focus for the past few years.  I really liked the idea of a program that was interdisciplinary and I liked the idea of a smaller campus. There’s such a diversity of nationalities represented at the Institute.  I liked the idea of interacting with a broad range of people.  I thought it sounded very interesting.

Q: Tell us about the research you conducted on shell material.
A: Initially, we were only looking to find ways to get chitin from different sources. Traditionally, people use shrimp, because it is easy and already a very popular industry for other things. We wanted to show that you could use something that had less demand, so we studied an insect called a cicada.  We proved one could extract chitin out of their shells.  Then we started using the chitin we were getting from cicada shells as a way to filter water.

Q: What are you researching in Fribourg?
A: Here I’m focusing on nanoplastics. I cannot say much as our research is still active and unpublished, but one hears often about the huge amount of trash that float around in the oceans. The UV radiation from the sun and the pressure of the waves produce tiny pieces of plastic known as microplastics and even smaller particles that are nano-sized. We know that aquatic species such as mussels and fish eat these and they can stay in their system.  So, we’re researching what that means for us—that we’re basically eating plastic

Q: I know you said this is active research, but do can you speak to what you hope to learn from this? What is your hypothesis?
A: It’s already been shown that the plastic does stay in fish cells, so we believe we will find something similar in human cells. However, as a rule, the human body is very good at filtering things out through the liver and the kidneys. There are many functions occurring to make sure harmful substances exit the body.  We are trying to find out if nanoplastic can indeed enter into our cells.  Also, if it does and then subsequently stays, what is it doing to us?

Q: Let’s transition to your experience living and studying in Switzerland. Is there anything that has surprised you about living here?
A: It is hard to put into words. There is a very different atmosphere in Switzerland compared to back home.  Things are more laid back.  It is a lot easier to get around.  The public transportation was a very pleasant surprise for me.  The trains and buses are really great and they’re always on time.  It’s easy to walk wherever you want to go.

Q: Do you have any funny memories or moments to share?
A: I’ve learned as I practice my French with my roommates or my friends that I have a really thick American accent. Sometimes, I’m speaking in French and nobody knows that I’m

speaking in French. There have been many funny moments.  For example, once, I tried to tell someone in French that I study chemistry—but instead of using the French word, “chemie,” I kept saying, “kem-i-yae.” We probably struggled to understand each other for ten minutes, but nobody knew what ‘kemiyae” was.  So sometimes, I think it would be better if I just stuck to English.

Q: Have you taken up any hobbies here?
A: I did go skiing with my friends. It was actually the first time for all of us. There was lots of smashing into the guard railing and falling on our faces. It was a lot of fun, though.  It’s definitely something I’d consider doing again.

Q: Is there anything else that you would like to tell the Swiss about your experience here?
A: I think it’s really beautiful. In Indiana, it’s just flat. We joke that Indiana is just cornfields.  So, to come here and see the mountains, and see how every city is so different with all kinds of beautiful old architecture and history–It’s really fun for me.