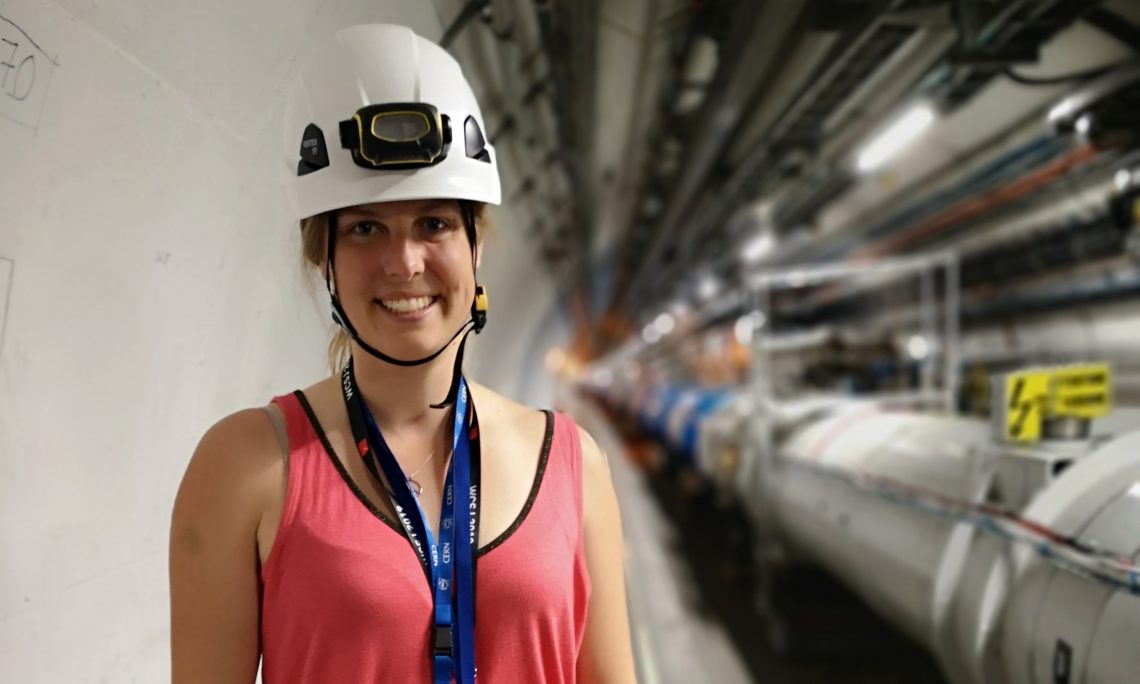 Since 2013 Sarah Charley has lived and worked in the Geneva area. Sarah is part of the CERN Press Office and manages the US CERN Communications and Media Relations. She is responsible for planning media visits for US journalists, coordinating US VIP visits with the CERN Protocol Office, working with US university press offices and writing articles for Symmetry Magazine. Sarah has a bachelor’s degree in chemistry from Bates College. Earlier this year the U.S. Embassy visited CERN. On this occasion we had the pleasure to meet Sarah Charley.  We could not pass up the opportunity to ask her a few questions about her life, work, and perspective on Switzerland.

What differences and/or similarities do you see between the U.S. & Switzerland?

A big difference I’ve noticed is the general attitude towards customers. In the US, people who work in the service industry are almost always positive, friendly and happy when interacting with customers, even if the client is being rude. (“The customer is always right,” mindset, so to speak.) This is not the case in the Geneva area. I’ve heard stories about people getting kicked out of shops for not saying “Bonjour” to the shopkeeper. It’s both shocking and at the same time—refreshing. It’s a good reminder to not take people around us for granted and to always be polite and professional no matter the context.

What surprised you most about moving to the Geneva area?

That you can see Mont Blanc from almost everywhere! When I first arrived, I was walking along the shore of Lac Leman and saw this beautiful snowy mountain perched in the distance. Even though it’s about fifty miles from Geneva, it’s huge and very prominent on the skyline. On some days I’m not sure if I’m looking at clouds or the rounded summit of Mount Blanc.

Assuming you’ve traveled some in Switzerland, what is one place you would recommend your friends/family visit and why?

Oeschinen Lake in Kandersteg. It’s an alpine lake located about a one-hour drive from Grindelwald and is accessible via Gondola or by foot. The crystal-clear blue pool reflects the towering cliffs that surround it. Because most tourists stick to the famous sites like Jungfrau and the Eiger, this lake is a little off the beaten path so you can really appreciate the nature without huge crowds. (Especially in the off season, like September or October.)

What local dishes have you sampled and loved?

I’m not a big fan of fondue, but I have become really fond of raclette. It’s a traditional dish from the Valais where a big block of cheese is toasted with a charcoal-burning stove. When it’s crispy, you scrape the melted part onto a plate filled with charcuterie, potatoes and miniature pickles. It’s a bit like fondue, but much more fun (and tasty!) in my opinion.

What is some of the most fascinating work you have been a part of at CERN?

Perhaps not fascinating, but the most fun project I have worked on was a music video parodying the song “Collide” by Howie Day. The original parody was made with three graduate students doing the music and myself doing the directing and editing. Howie Day saw the video and was so impressed that he asked if he could come to CERN. We ended up convincing him to cover our parody and made a music video with him singing our physics-themed lyrics: https://www.youtube.com/watch?v=1YB0xM9cgr8

What has it been like working in such a unique and diverse environment?

At first it was challenging because even though “English” is one of the official languages at CERN, everyone actually speaks “physics.” Learning the lingo and all the ins and outs of the experimental program took several months. It’s also a completely different way of thinking because particles are also waves, and matter and energy are two sides of the same coin.

In your opinion, what is the most mysterious unanswered question in your field?

There is a type of matter called antimatter, which is exactly the same as the ‘matter’ particles we know about except for one key difference: their charge is opposite. So, if an electron is negatively charged, then a “positron” is positively charged. When a matter particle meets its antimatter equivalent, they annihilate into pure energy. This process also works in reverse, and pure energy (in the form of light) can spontaneously split into a particle and antiparticle.

Antimatter is the basis of many science fiction books and films (like ‘Star Trek’ and ‘Angles and Demons’). But antimatter itself is very, very real. In fact, scientists at CERN can make antimatter and trap it inside electric and magnetic fields and hold it for around a year! So here’s the problem—if matter and antimatter and identical except for their opposite charges, then why is the universe made of matter and not antimatter? And if energy transforms into equal parts matter and antimatter….then where did all the antimatter go that was produced during the big bang? This is still a big mystery that physicists are busy unraveling.

Why is gravity so perplexing to physicists?

In our day-to-day lives, gravity is the force we are the most conscious of (especially if you’ve ever tried to walk around Geneva when the sidewalks are icy!) But from a particle physics point of view, gravity is incredibly weak—so weak that particle physicists just discount it in their models. There are a lot of ideas for why gravity is so weak on a microscopic scale, but so far experimental physicists haven’t found any evidence.

Tell us something that will blow our minds!

The reason black holes look ‘black’ isn’t because they absorb light, but because they consume light. A beam of light that passes too close to a black hole will get pulled off course and sucked towards its ultra-massive heart. The gravity of a black hole is so strong that even massless particles of light (traveling at the speed of light) cannot escape its grasp!

What impact can the research at CERN have on our world?

Our primary goal is to advance human knowledge – but along the way the technology that we develop can find all sort of interesting applications.  One project that we’re working on that the moment is to use our particle accelerator and detector expertise to build a compact, simple and robust radiotherapy machine that could be used in places where electricity supplies are unreliable or the environment is hot and dusty. A machine like this could transform the outcomes of cancer patients in developing countries who have no access to the kinds of treatment that we take for granted.