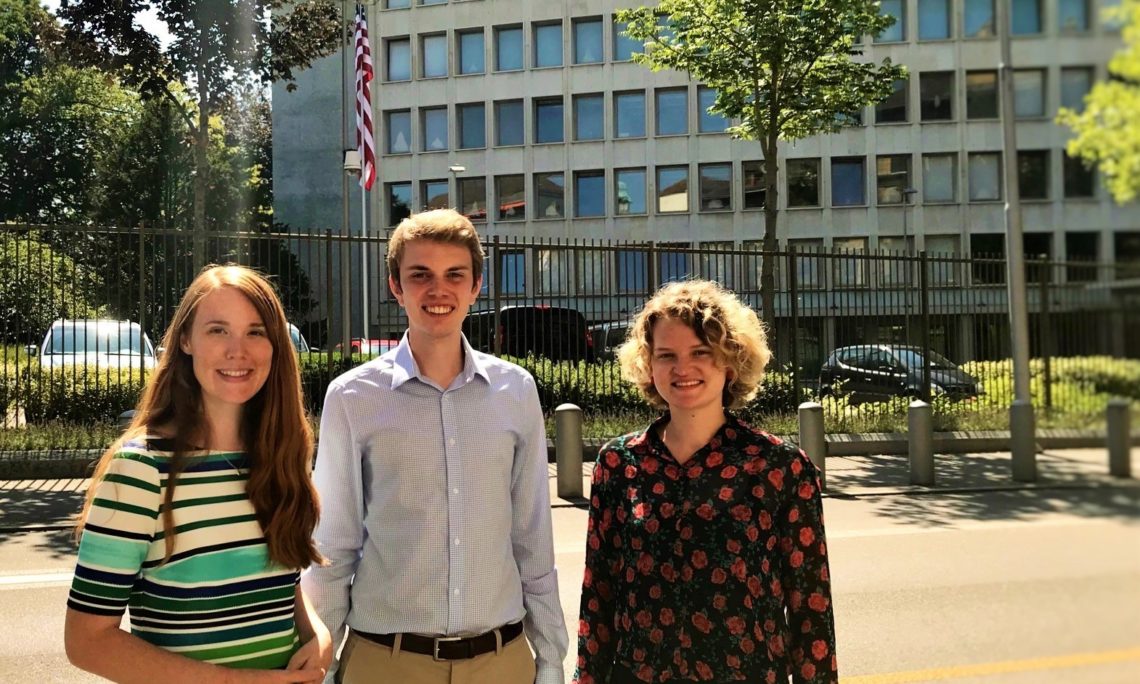 U.S. Embassy Bern welcomed three American students this summer through the State Department’s internship program. Through the internships, they were able to explore potential professional pathways in the U.S. Foreign Service and to immerse themselves in Swiss culture.

We interviewed the three young professionals about their passions, projects, and perceptions of Switzerland.

Allison Tschiemer, 26, is originally from Dallas, Texas. She currently lives in Little Rock, Arkansas where she attends the University of Arkansas at Little Rock School of Law and the University of Arkansas Clinton School of Public Service where she is pursuing both a Juris Doctor degree and a Master of Public Service degree. Allison interned in the Public Affairs Section of the Embassy where she communicated American foreign policy and values across various media platforms and facilitated in cultural exchange programs.

Interested in pursuing a career in public service, Allison appreciated the opportunity to work alongside dedicated Foreign Service officers and the local Swiss team members who consistently advance American interests and ideals in Switzerland. She remarked, “I was thrilled to take the plunge into the Public Affairs Section. The team members welcomed me in as a friend. We laughed and learned together, while sharing stories and discussing diplomacy, public service, and values. We even took a literal plunge into the Aare River together!”

She witnessed the power of the Embassy’s exchange programs when a Swiss student, after listening to a presentation from an American musician and disability advocate, asked what she could do to advocate for disability rights. “This moment showed the true power of cultural exchange programs.”

Aside from dives into the Aare River, Allison has enjoyed exploring the Swiss countryside by train, ascending Alpine peaks, and eating too much cheese and chocolate. Although she is skeptical that she could survive a winter in Switzerland, the Swiss summer has been a fulfilling experience from the revelry of the World Cup to the energy of the Montreux Jazz Festival. “I hope to return to this charming and welcoming country.”

Daniel Evans, 20, lives in Ann Arbor, Michigan. While he was born in Cleveland, Ohio, he spent ten years living abroad in Germany. He attends the University of Michigan where he is majoring in English and economics. Daniel interned in the Political/Economics Section of the Embassy where he researched various projects and drafted cables.

His summer internship has been a positive experience due in large part to the enthusiasm and sincerity of Embassy staff, in particular his colleagues in the Political/Economic Section. Daniel remarked, “My colleagues have done a wonderful job of giving me interesting and meaningful things to work on, telling me about their jobs as Foreign Service officers, offering insightful career advice, and integrating me into the office environment.”

One piece of advice Daniel received from a colleague was to explore the Schynige Platte. After ascending the Platte by cogwheel train, Daniel was awestruck by what he witnessed, commenting, “The views of the mountains at the top, as well as of Lake Brienz and Lake Thun, are nothing short of spectacular.” Aside from enjoying scenic train rides and hiking in the pristine mountains, Daniel has been most impressed by Switzerland’s diversity, “more specifically, how Swiss citizens manage to unify across their cultural differences under a common understanding of what it means to be Swiss. In a country with four different national languages in which a decent portion of the population lives in remote areas in separate mountain valleys, that seems remarkable.”

Ann Marie Smetona, 21, is from Cleveland, Ohio. She attends Case Western Reserve University where she is majoring in political science and Spanish. Ann Marie interned in the Consular Section of the Embassy where she analyzed trends in visa applicants and drafted cables on those trends.

While at the Embassy, Ann Marie was amazed by the multitude of services the Embassy provides and the wide-range of visa applicants served. As a part of the internship program, the three interns visited the U.S. Mission to Geneva where they spoke with U.S. diplomats and explored the United Nations. Ann Marie was indelibly affected by this experience, “Not only did it open my eyes to how important Geneva and all of Switzerland is on a global scale, but it also inspired me to pursue a career in the United Nations to combat human trafficking. Even though I was only in Geneva a short time, it will hold a special place in my heart for the rest of my life.”

Throughout the summer, Ann Marie explored many parts of Switzerland and was impressed by how well maintained the historical districts and buildings are. “Bern’s old town really transports you back to the middle ages and in my opinion, is the best old town in Switzerland.” She enjoyed the peace and quiet of Switzerland, which has helped her become more introspective in nature. “Overall, I will treasure how much I have learned and grown in Switzerland.”

This blog post is part of a series of profiles on Americans in Switzerland, in which U.S. Embassy Bern portrays the lives, travel, and work of Americans met in Switzerland. Stay tuned on social media via #AmericansInSwitzerland.