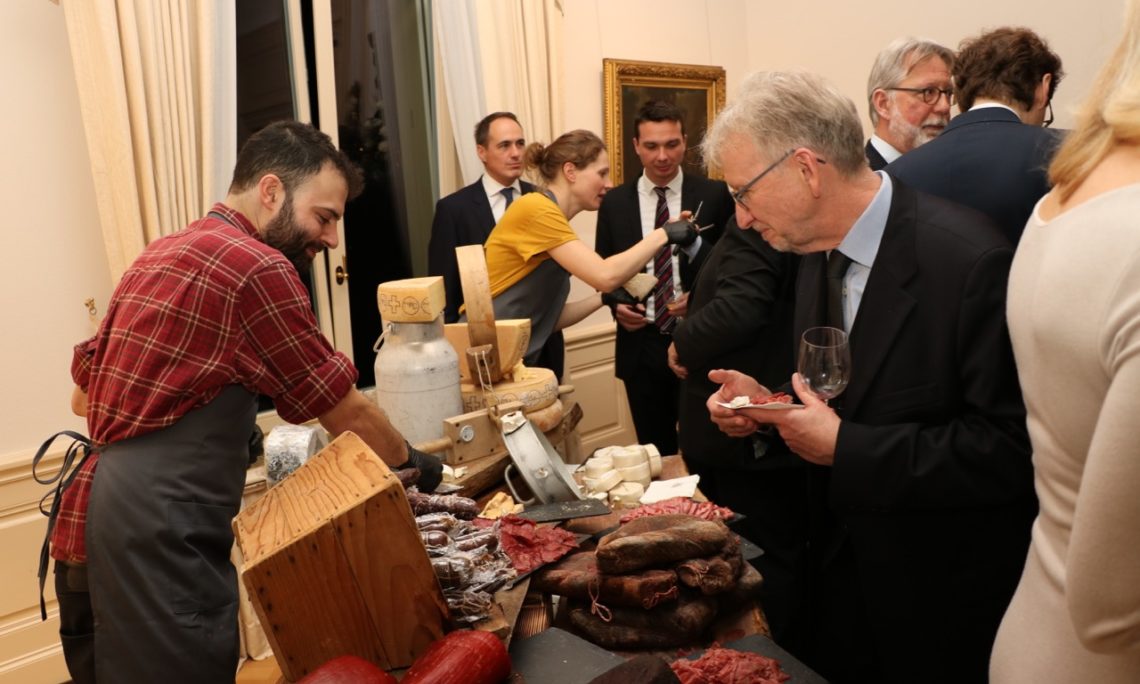 U.S. Embassy Bern met with Sam Frank, who was in Switzerland for a week to visit the company he works for in the U.S., a Swiss cheese and sausage producer. On his first night in Bern he joined his employer on a catering job at a reception in honor of the arrival of U.S. Ambassador Edward McMullen. We asked Sam to tell us more about his experiences in Switzerland.

Sam Frank, who lives in Brooklyn, New York, began working for Jumi, a Swiss cheese and sausage producer, over the summer. Sam has been passionate about cheese for many years and has been working in the cheese industry since he finished college. “The longer I’ve been in it, the more I’ve come to respect the small cheesemakers of Europe who have maintained their traditional methods of dairy farming and making cheese in a world economy that demands scaling up, only the most cutting-edge technology, and cutting costs at every corner. These artisans are the true heroes of the cheese world.”

How did Sam end up working for a Swiss cheese producer? “Jumi produces very high quality cheeses at their creamery in the Emmental. In addition to selling their products all throughout Switzerland, they export to numerous countries in Europe, as well as Japan and Singapore. Their most recent project has been to export their cheese to the U.S., which is where I came on board. We have been importing a small selection of their cheeses into the U.S. since October, selling mostly to independent retailers around the Northeastern United States. We also have a small distributor in the Pacific Northwest. So far, the cheeses have been very well received!“

On his first night in Switzerland Sam helped out at a cheese and cured meats buffet for an event at the residence of the U.S. Ambassador in Switzerland. “Ambassador McMullen seemed to really enjoy the cheeses and meats, and he even spent quite a bit of time with us to hear more about our products.”

What surprised Sam most about Switzerland was the pristine and unbelievably gorgeous farmland and natural, mountainous landscape. “On Sunday, I visited the Oeschinensee-Kanderstag ski resort. Needless to say, the scenery was absolutely stunning. It was a beautiful, sunny day and I was surrounded by numerous Alpine peaks. I went sledding for the first time. Of course, back in the States, I have actually been sledding many times before, but in the U.S., we only sled on small hills. This was my first time sledding down an actual mountain, which was equal parts fun and exciting and incredibly terrifying.“