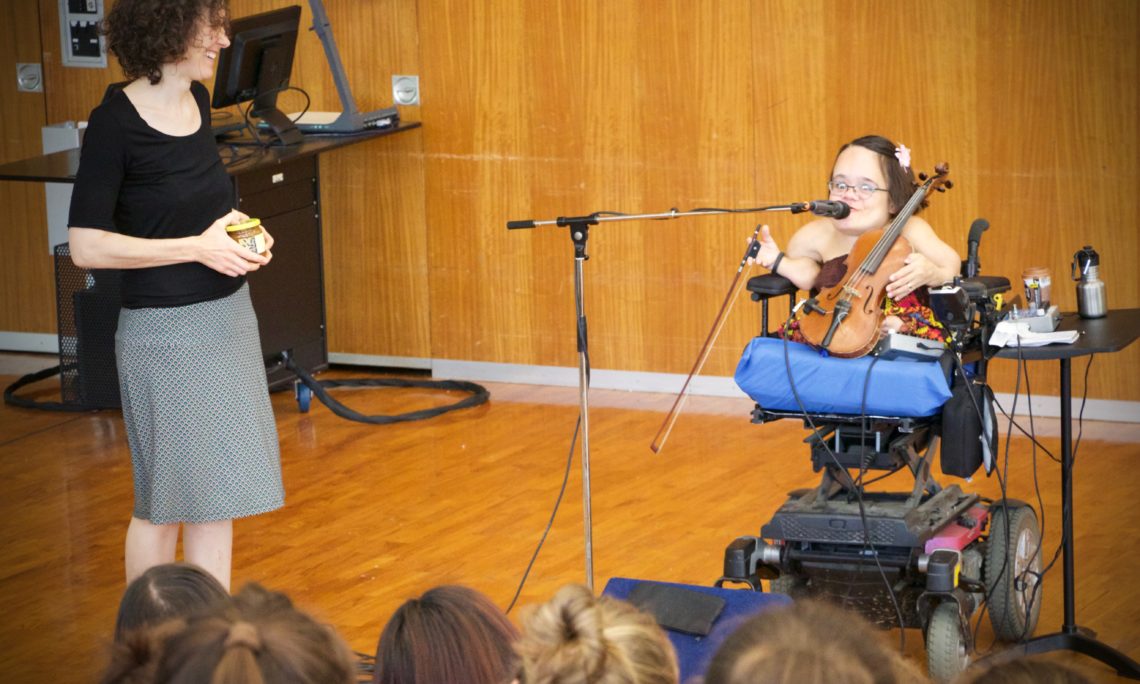 The U.S. Embassy Bern was happy to host the American violinist Gaelynn Lea from June 12 until June 21, 2018.  She visited Switzerland as part of the State Department’s Arts Envoy Program.  During her stay, Gaelynn met with several high school classes from Bern and Aargau and more than 100 students from the International School in Bern.  Swiss students had the opportunity to engage with a truly inspiring American artist.  Gaelynn is not only an incredible musician but also a powerful spokesperson who is able to connect with all manner of people of various backgrounds and ages.  For the Swiss students, she had two impactful messages: Firstly, one is able to advocate for accessibility rights regardless of having a disability.  Secondly, achieving seemingly impossible tasks can happen if you truly set your mind to it.  Students were moved to tears and applause by her music, and asked her what they could do to advocate for human rights.

Gaelynn has a congenital disability called Osteogenesis Imperfecta.  In recent years, she has used her music as a platform to advocate for people with disabilities and to promote positive social change.  She became passionate about classical music from an early age and developed a technique for violin which involves holding the instrument in front of her like a cello.  Gaelynn discussed her special technique and creative approach to music at a roundtable at the U.S. Embassy Bern with U.S. Fulbright students, Swiss music professionals and educators.  In addition, she delivered a lecture at Vidmar Hallen Bern and a concert with Bernese orchestra Tabula Musica at Zentrum Paul Klee, which hosted the first festival for accessible music in Switzerland. The Tabula Musica orchestra consists of musicians with and without disabilities.