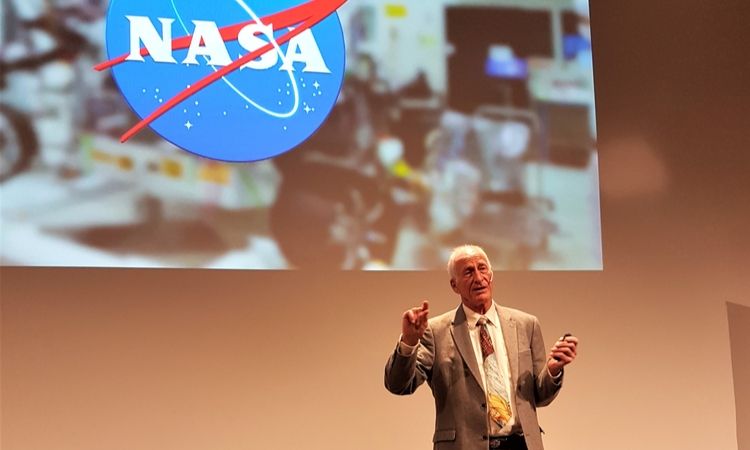 He spoke to students, entrepreneurs, and scientists about space travel, his experiences as an astronaut and the future of human space exploration. Hoffman’s latest project is related to NASA’s mission to Mars in 2020. It is called MOXIE, an experiment attached to the Mars2020 rover that will extract oxygen out of the CO2 in Mars’ atmosphere. Oxygen is important because it is a resource needed for astronauts to breathe on the Red Planet, and to oxygenate the fuel a spacecraft will need to return to Earth! Fun Fact: Swiss company Maxon made the motors for the wheels on the Mars2020 NASA rover.

Jeffrey Hoffman travelled to the French-speaking part of Switzerland to present to students at schools in Pully and La Chaux-de-Fonds. He gave in-depth technical talks at the Federal Institutes of Technology in Lausanne (EPFL) and Zurich (ETH, watch the lecture here). He further met with space enthusiasts at the Fribourg Innovation Club and was warmly welcomed by the Federal Swiss Space Office at a meeting in Bern.

Swiss Astronaut Nicollier Is a Colleague

Dr. Jeffrey Hoffmann enjoyed highlighting Swiss-U.S. space cooperation. Did you know that Dr. Hoffman and Swiss astronaut Claude Nicollier are old friends and colleagues? They’ve been on three shuttle missions to space together – perhaps more than any other two astronauts ever! The two have also climbed the Matterhorn twice. They even took a piece of it to space with them on one trip.

These days, Jeffrey Hoffman teaches in the Department of Aeronautics and Astronautics at the Massachusetts Institute of Technology. He was the first person to spend 1,000 hours on Space Shuttle missions. Additionally he helped repair the Hubble Telescope, and designed advanced space suits and tools for building the International Space Station. He became NASA’s European representative and continues to serve NASA as a deputy principal investigator for the 2020 mission to Mars.

Jeffrey Hoffman in the Swiss press: