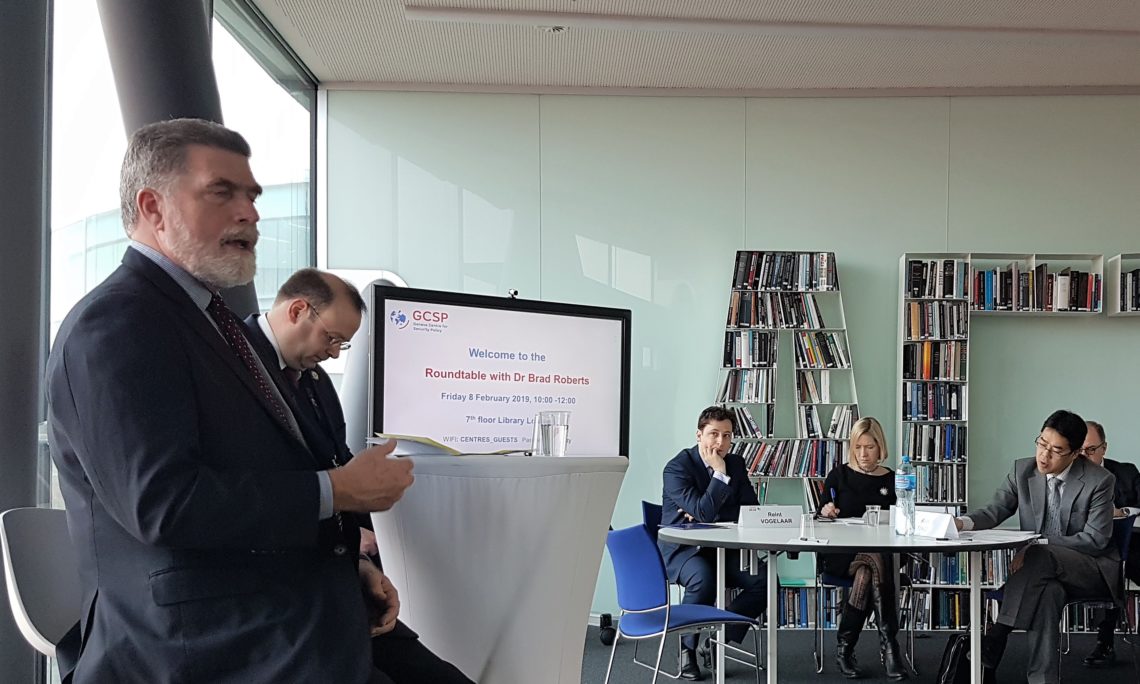 Dr. Brad Roberts, Director of Lawrence Livermore National Lab’s Center for Global Security Research, visited Switzerland early February  for several speaking engagements on invitation from the Center of Security Studies at the ETH and supported by the U.S. Embassy.

Dr. Roberts addressed the idea of strategic stability as a useful framework for understanding how the relationship among various global challenges—including nuclear proliferation, terrorism, cyber security, and great power relations—affects the prospects for international peace and stability. At his talks, Brad also addressed current developments in balance of power between larges countries like the U.S., China, and Russia, and assessed the potential consequences of U.S. and Russian withdrawal from the Intermediate-Range Nuclear Forces Treaty (INF ).  He also discussed new regional challenges, integrated strategic deterrence (including cyber security and space) and strategies for enhancing global stability in the coming years.

Dr. Roberts gave a public talk at the University of Geneva, organized by Foraus, GSI and Swiss Club de Presse; had a discussion in a smaller setting at the GCSP;  and delivered a public address at the Center of Security Studies of the ETH.

If you would like to read more about Brad Roberts’ views, please read the following interview published by the NZZ: «Europa hat schon genug Atomwaffen»

Before joining Lawrence Livermore, Dr. Roberts served as Deputy Assistant Secretary of Defense for Nuclear and Missile Defense Policy (2009-2013) and as  a member of the research staff at the Institute for Defense Analyses and as an Adjunct Professor at George Washington University (1995-2009). His book, The Case for U.S. Nuclear Weapons in the 21st Century (Stanford University Press) was recently recognized by the American Library Association as one of the outstanding academic titles of 2016.