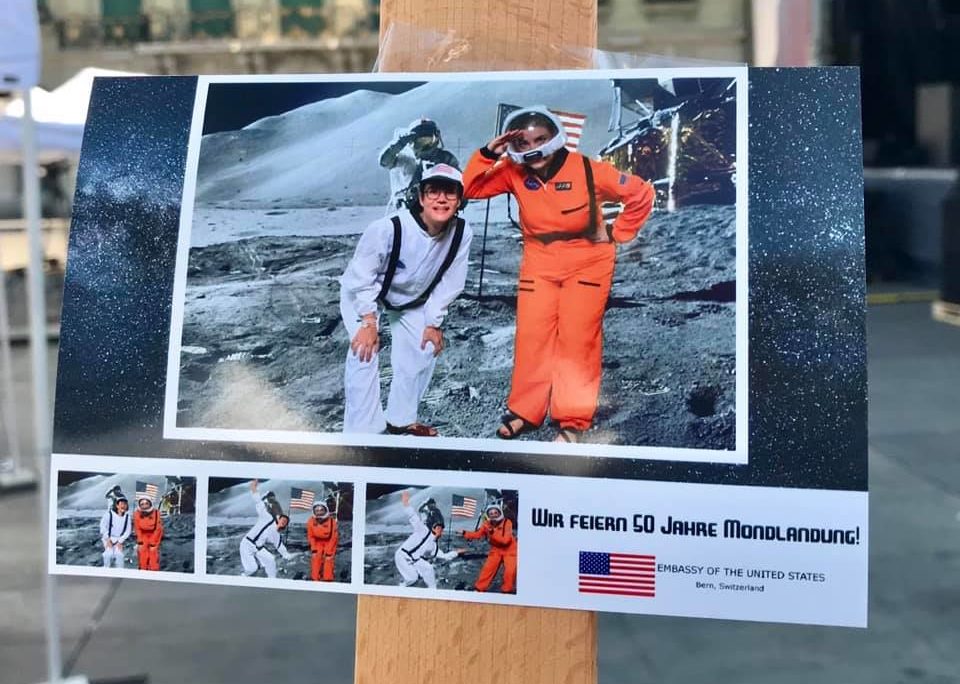 At the Embassy's photo booth on Bern's Bundesplatz, visitors were able to take their very own selfie on the moon!

July 20, 1969, American astronauts Neil Armstrong and Edwin “Buzz” Aldrin became the first humans to land on the moon as part of the Apollo 11 mission. 50 years later, the U.S. and the world celebrate this historic event which serves as a symbol for human progression and achievement in space exploration and science. The only foreign experiment on board Apollo 11 was the Solar Wind Composition Experiment (SWC), which was largely designed by Professor Johannes Geiss at the University of Bern Physics Institute. It was placed on the moon by Aldrin, even before the American flag, to maximize the exposure time for the foil to capture solar particles on the lunar surface. Here in Bern, celebrations of the 50th anniversary of the moon landing were numerous and memorable – we are honored that Switzerland is commemorating the partnership with the U.S. during the Apollo 11 mission and that they continue to collaborate on NASA missions.

Last month Charles Duke, the tenth and final U.S. Astronaut to place the sail on the moon, was at the University of Bern to attend the dedication of a sculpture in honor of Dr. Geiss. He was at the U.S. Embassy-sponsored Swiss premier of the documentary film “Lunar Tribute” at the Dampfzentrale by the Bern-based photographer and filmmaker Rob Lewis. After the screening, Duke and his wife Dorothy shared stories of space and faith which can be viewed here.

There was an additional movie screening at Kino Rex for “First Man” with welcoming remarks by Ambassador McMullen – we were happy to support this film of the story of Neil Armstrong and the Apollo 11 crew landing on the moon.

The U.S. Embassy Bern also participated in the opening of the “Rocket Cube” hosted by University of Bern on the Bundesplatz to kick off “Bern in Space” festivities. Ambassador McMullen delivered remarks, as did Swiss-American Associate Administrator for NASA’s Science Mission Directorate, Thomas Zurbuchen. Zurbuchen later spoke at University of Bern’s space science symposium, stating that international collaboration is the key to amplifying progression in space research and diplomacy.

Taking Selfies on the Moon and Building Rockets

At the Space Village hosted by the University at Bern’s Bundesplatz, our Embassy ran a photo booth where many stopped by to take “moon selfies” dressed in suits – we had a great time seeing so many smiles! Additionally, the children of U.S. Embassy Bern diplomats enjoyed participating in a Rocket Building competition hosted by Uni Bern on the Grosse Schanze.

These events are a reminder to us of the great scientific achievements of our country and the importance of the collaboration of Switzerland in NASA missions. Among the items left on the moon surface was a plaque that read “Here men from the planet Earth first set foot on the moon – July 1969 A.D. – We came in peace for all mankind.” We look forward to the next great leap mankind will take in space exploration!