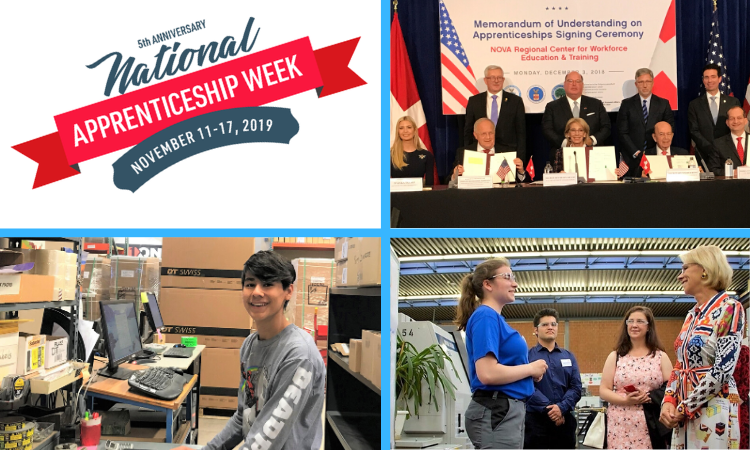 As the U.S. celebrates the 5th National Apprenticeship Week, we look back on recent highlights of Swiss-U.S. apprenticeship cooperation. In the U.S., apprenticeships are not as common as in Switzerland – yet. The U.S. government is looking for new ways to train the workforce of the future, and it is thankful for partners like Switzerland who have many insights to share in the area of vocational education.

A Timeline of Swiss-U.S. Apprenticeship Highlights

U.S. Secretary of Education Betsy DeVos visited Switzerland in June 2018. “As part of my first trip abroad as Secretary I chose to visit Switzerland and witness their innovative approach to apprenticeships,” she wrote in her blog. She wanted to see how Switzerland prepares students for successful lives and careers.

Secretary DeVos visited key players in the Zurich and Winterthur area to learn about their roles. Being able to talk to students, apprentices and experts gave her a holistic view on the Swiss vocational education system. A more details report of Secretary DeVos’ visit can be found here.

Ambassador McMullen joined Ivanka Trump, U.S. Secretaries of Education, Labor and Commerce, then-Swiss Economy Minister Johann Schneider-Ammann and then-Swiss Ambassador Martin Dahinden for the signing ceremony. This is a testament to the popularity the topic enjoys in both our countries’ governments. In addition, more than 20 Swiss companies pledged to provide job training to American workers at their U.S. facilities. The program is part of the President’s “Pledge to America’s Workers,” aimed at expanding programs that educate, train, and reskill American workers.

Ambassador McMullen led a delegation of 48 Swiss business leaders to the SelectUSA Investment Summit in Washington, DC in June 2019. The large Swiss footprint mirrored the sizable Swiss investment in the States (Switzerland is the 7th largest foreign direct investor). And that is not all: Swiss companies promised to help create apprenticeship and training opportunities in the U.S. and shared their expertise on vocational education in various meetings and panels.

June 2019: U.S. Community College Presidents Get Inspired by Swiss Apprenticeships
The U.S. Department of Education led a delegation of U.S. community college presidents to Switzerland. They wanted to learn how Switzerland links its education system with the business world.

The program included engaging visits at Oertli, Zurich Insurance, the Federal Institute of Technology (ETH) in Zürich, and many more. The participants returned home with many ideas about how to create more apprenticeship opportunities in their home states.

July 2019: JP Morgan CEO Jamie Dimon Visits Zurich for Apprenticeship Study Tour
CareerWise Colorado is a nonprofit that launched an apprenticeship initiative for high school students in Colorado to mimic the Swiss approach. Swiss companies including Pilatus Aircraft and Mikron joined CareerWise and are offering apprenticeships at their Colorado facilities.

CareerWise supports other states as they build their own Swiss-style apprenticeship programs. As part of that effort, CareerWise helped organize a one-day tour of apprenticeship programs in Zurich for Jamie Dimon, CEO and Chairman of JP Morgan Chase. He got to see first-hand how youth apprentices help companies be more innovative and ultimately more profitable. Ambassador McMullen joined them for dinner to discuss their experiences.

Currently, there are over 30 Swiss companies that have created or joined apprenticeship programs at their local facilities in the United States. And the number is growing! To create more opportunities to train the workforce of the future (other than a traditional 4-year college), the U.S. heavily relies on private sector involvement and experienced companies to lead the way. A few recent Swiss examples:

Swiss bicycle-component manufacturer DT Swiss in Colorado was approached by school administrators who were looking to build a Swiss-style apprenticeship program for high-school aged students in their district. DT Swiss could not resist becoming a part of the program. They took on their first apprentice in summer 2017 in the manufacturing department. A second apprentice has started this summer and is being trained in the logistics department.

Swiss train manufacturer Stadler Rail opened its U.S. factory in Utah in October 2017 – and has already partnered with Salt Lake Community College and the Salt Lake School District to develop a vocational training program based on the Swiss apprenticeship model. 16 apprentices are part of the initial class who go to school, work and get paid at the same time, and thus create a pipeline of skilled workers for the company.

Packaging systems manufacturer Georg Utz in Indiana started a three-year “Injection Molding Process Technician” apprenticeship together with Ivy Tech Columbus. They pay for their apprentices’ tuition, salary and a training trip to a Georg Utz facility in Europe. The apprentice can expect to learn all aspects of the daily business like material handling, robotic assistance, maintenance, and quality control. Upon completion of the program, the apprentice will be awarded an associate degree from Ivy Tech Columbus and will become a permanent member of the Georg Utz team.

Digital security company Kudelski just started training cyber security apprentices at its Phoenix location. They wanted to show that apprenticeships are not just limited to manufacturing jobs. On the contrary, they thrive in white collar professions as well!

Autoneum is an internationally active Swiss automotive supplier headquartered in Winterthur, Switzerland. The company has formal apprenticeship programs registered in Pennsylvania and Ohio and is exploring the possibility of implementing a vocational education program in further locations.

Overall, Swiss-style apprenticeship programs can be found in over 20 U.S. states. We are excited for this number to grow and apprenticeship opportunities to expand further!