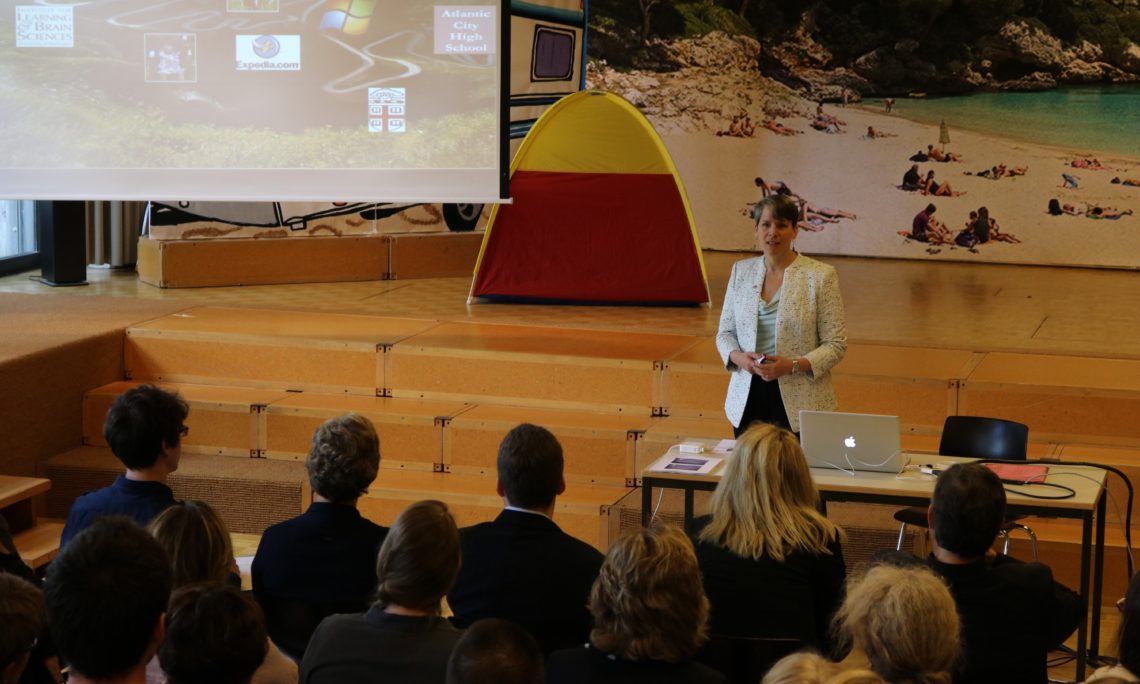 Meeting with Swiss students to discuss U.S. policy and share information on education systems in the U.S. and Switzerland is a high priority for Embassy Bern.  As part of the ongoing educational outreach, Ambassador Suzi LeVine and Public Affairs Officer Stephanie Morimura recently visited two schools in the Canton of Bern.

On May 20, Morimura visited the Schulzentrum Kreuzfeld 4 in Langenthal, where she was greeted by headmaster Peter Rubeli and the mayor of Langenthal, Thomas Rufener. The Mayor and Headmaster led a tour of the school building pointing out the extraordinary “Timeline” art project, which presents elements from the school’s history in a highly creative way. Morimura also had a chance to learn about the diversity of the student body, meeting with students from Austria, Canada and Albania. Finally, she gave a presentation to Gymnasium students and teachers about education in the U.S., highlighting the U.S. efforts to improve and further STEM education.

On May 22, Ambassador LeVine visited the Oberstufenzentrum Langenthal, where she was greeted by headmaster Rolf Poschung and member of the schoolboard Janine Witschard. Mr. Poschung explained how the school supports its students in finding the right career after the end of their compulsory education. Peter Eberle, from the job counseling office BIZ, explained how his office supports students who plan to do an apprenticeship and counsels them on narrowing down the choices to find an occupation that connects to their fields of interest.

Ambassador LeVine visited a class and met discussed questions related to U.S. policy with the students. Following the discussion, the students made sure not to miss the chance to take a selfie with her. At the end of the visit, the Ambassador made a presentation on education and career choices in the U.S. and was treated to a rendition of Echosmith’s “Cool Kids” and Adele’s “Rolling in the Deep” by the school’s very own student bands.