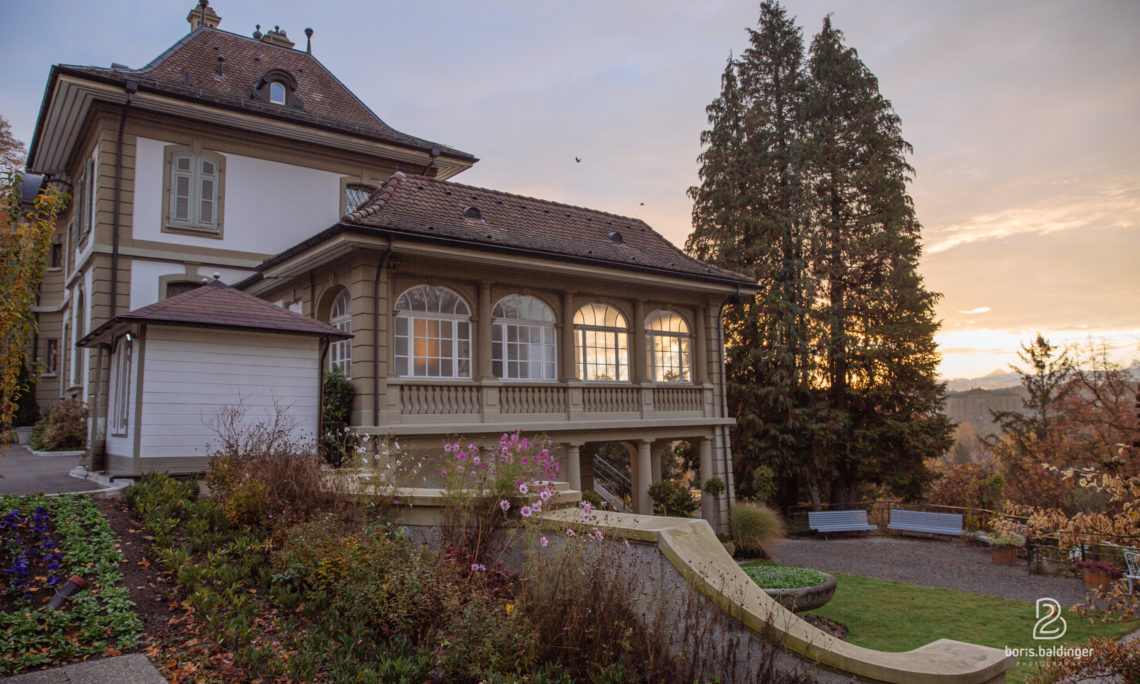 History of the Residence
The Residence of the Ambassador of the United States in Bern is situated on the grounds of what was once a 19th century cottage called “Blumenrain,” owned by Elisabeth von Fischer-Daxelhof. It was later the home of August Friedrich Rudolf von Wurstemberger and his family from 1823 to 1837. The original site included the present property plus the land on which the building housing the Federal Department of Justice and Police now stands

In 1912, “Blumenrain” was purchased by Mr. Albert de Muralt. He asked August von Wurstemberger’s son, Mr. de Muralt’s nephew and distinguished architect, René von Wurstemberger (1857-1935) to rebuild a more comfortable house, now referred to as “Rain,” replacing the cottage. The architect took great care to retain the character of the original cottage but added wings on either side. “Rain” was René von Wurstemberger’s last work. His most famous building is the Stadttheater (Opera House) in downtown Bern.

In 1923 Ludwig Albert von Muralt gave the villa, “Blumenrain,” to his four children, Raoul von Muralt, Yvonne Barbara Favre, Genevieve Marie von Tavel and Hermine Germaine Syz. The U.S. Government purchased the building from them in 1947 for CHF 672,200 or then $155,825. The first American Chief of Mission to occupy the building was Mr. Leland Harrison, who served as Minister to Switzerland from 1937 to 1947. He occupied the building on a private lease.

The Residence is located five minutes on foot from Old Town Bern and the Houses of Parliament. It is surrounded by approximately 3.65 acres (14,792m2) of park. At the time of the purchase of the building the address was Taubenstrasse 14. Following the construction of the new main entrance drive in 1978, the address was changed to Rainmattstrasse 21.

The landscaping remains virtually unchanged from its inception. The grounds are partially wooded, and a stream cuts through the lower meadow on the south side. There is a pond for trout and one for goldfish. These have handsomely patterned stonework sides and bottoms done in Italian masons. In a third pond, salamanders reside. There is a springhouse in the meadow and an ornamental fountain in the main front courtyard.

Spring brings rhododendrons, azaleas, tulips, jonquils and narcissi. The ubiquitous geranium follows these. In June, the roses bloom, as do the water lilies. The cutting garden above the greenhouse is a splendid rainbow of color long into autumn.

“Rain” is a gracious house; in some aspects, cozy. Its rooms are large and well proportioned and full of sun in season. From the elegant terraces off the dining room, from the sun-room, as well as from most of the rooms in the house, you have breathtaking views of the emblematic peaks of the Alps, the Eiger, the Mönch and the Jungfrau. There are loving touches in marble fireplaces, moldings, paneling, and friezes.

The house has sustained several structural changes since its acquisition.

In 1951, a ground-floor balcony was excavated in order to add a cinema and an additional bathroom was installed in the east side bedroom.

In 1956 the cement bottoms of the fountains were removed, revealing the original stone patterned basin that one sees today (Italian art work). It was around this time that the well rights included in the property deed, which had originally been established for the estate some time prior to 1858, were relinquished to the community of Köniz and the fountains connected to the Bern water supply system.

The exterior of the house was given a complete face lifting during 1975.

The interior of the Residence was furnished by the Foreign Buildings Office (FBO) of the Department of State during 1947, 1948 and 1949 in a mixture of styles including Louis XIV, XV, XVI and “American Comfortable.” In 1977 FBO had its interior decorator refurbish some of the reception and Ambassadorial rooms.