Home Página Inicial | Holiday Calendar for the U.S. Embassy in Bern | Labor Day: An Ode to the American Worker 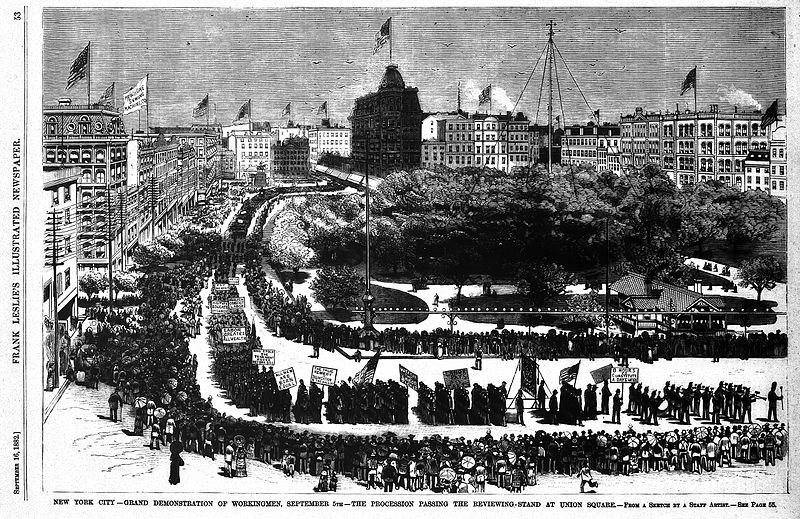 Unlike other U.S. holidays, Labor Day does not pay tribute to a person or memorialize a historic event. It gives voice to the American worker.

The innovation surge that drove manufacturing during the 19th century had given rise to a “working class” of people employed by others — on others’ terms. By the late 1800s, poor working conditions were a source of social discord, especially in cities, where immigrants were arriving in large numbers.

The labor movement stirred mixed sentiment in America, but many workers believed it offered a unified voice that would hasten improvements. Organized labor played a role in America’s social and cultural development — and in establishing protections for workers and the first notable commemoration of Labor Day.

On September 5, 1882, New York’s unions hosted a “workingman’s holiday.” An estimated 10,000 workers took the day off without pay to march for reduction of the 12- to 16-hour workday. A quarter million New Yorkers turned out to watch the parade, which concluded with a picnic for workers’ families.

The next day’s New York Times reported that “those who rode or marched in the procession were cheerful, and evidently highly gratified with the display. … The great majority smoked cigars, and all seemed bent upon having a good time at the picnic grounds.” Banners called for “Eight Hours for a Legal Day’s Work” and “Less Hours and More Pay.”

Unions continued the annual celebration, and in 1894 Congress established the first Monday in September as the nation’s official Labor Day. The eight-hour day eventually became the legal standard in 1940 through amendments to the Fair Labor Standards Act of 1938, which also banned child labor and set certain wages.

Throughout the country’s history, sculptors, composers, authors and painters etched their perceptions of workers’ lives into the social consciousness.

“The truly great man is he who would master no one, and who would be mastered by none,” Kahlil Gibran, Lebanese-American artist and philosopher, mused in Sand and Foam, his 1926 collection of spiritual reflections.

Gibran’s quote is engraved beneath the arches of Transcending, a 19.2-meter steel-and-granite monument to the legacy of labor that rises above Hart Plaza in Detroit, the heart of the U.S. automobile industry and witness to labor’s sterling successes and devastating defeats.

Raised in Detroit during turbulent times, Philip Levine would convey a poetic message about the working class. The 1930s brought notable work stoppages — “strikes.” It was a restless period that painted the boyhood backdrop for Levine, who arrived in 1928 as a newborn son of Russian Jewish immigrants.

Leading the Way in the 21st Century Economy

Almost a century and a half after the first “workingman’s holiday,” the U.S. workforce is more diverse, skilled, innovative, and mobile than ever – and U.S. workers are among the most productive in the world. In fact, U.S. workforce output per hour is more than 30 percent above the OECD member country average. The United States also prides itself on workforce development programs and technological innovations that directly impact labor skill requirements. Looking to the future, the United States has prioritized collaborative mechanisms with public and private-sector organizations to ensure its workforce is able to meet the needs of a 21st century economy. Today, just as in 1882, the United States is an ideal place for foreign businesses to invest and success in the U.S. market can help drive success globally. With an annual GDP of $20 trillion and population of over 325 million, the United States is the world’s most attractive consumer market, offering unmatched diversity, a thriving culture of innovation, and highly productive workforce. Companies of all sizes – from startups to multinationals – can find the ideas, resources, and market to succeed and grow.