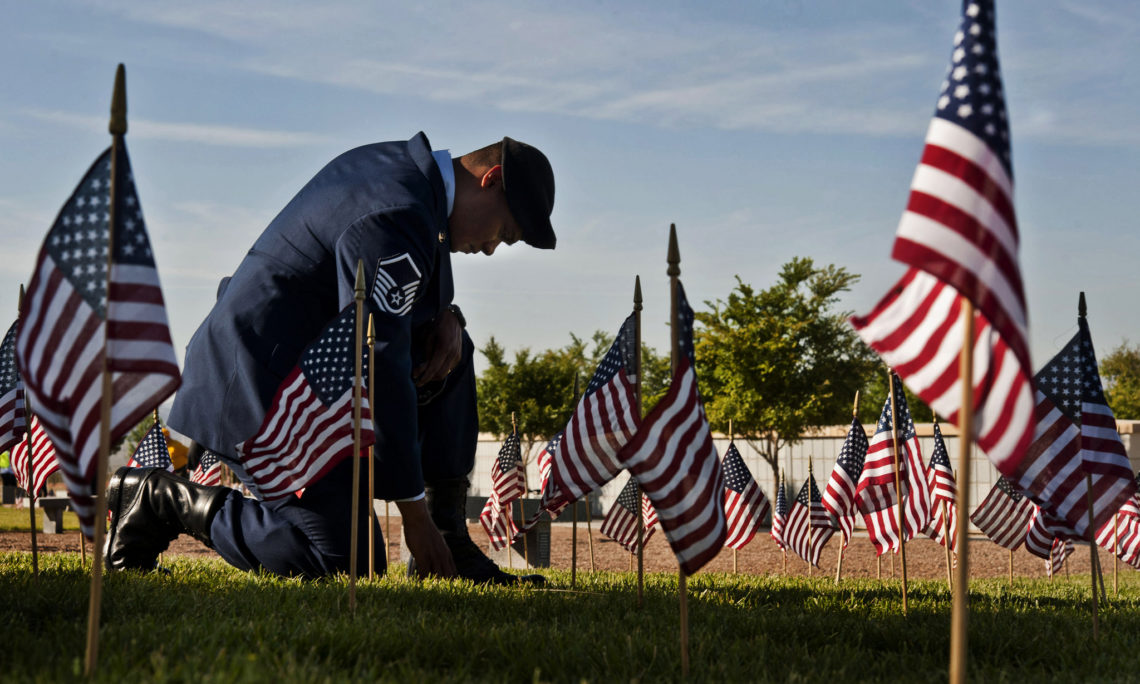 Of the two official United States holidays recogniz­ing the commitment of members of America’s military services, Memorial Day honors those who lost their lives while defending their country.

The holiday is observed on the last Monday of May, as weather is turn­ing warm and most schools and universities are adjourning for the summer, establishing Memorial Day weekend as the unofficial beginning of summer.

On that three-day weekend, many people travel to visit friends and family. They attend events rang­ing from community gatherings to large sports competitions. The Indianapolis (“Indy”) 500 motor race, for instance, attracts an estimated 300,000 people on the Saturday before Memorial Day. But many Americans also visit cemeteries, where volunteers often place American flags on graves. On Memorial Day itself, a national moment of silence takes place at 3 p.m. local time to remember the war dead.

Even as Americans enjoy the com­ing of summer, they also can be found in somber moods. Veterans Day, in contrast, honors every­one who serves or has served in defense of the country and is observed with celebrations on the same date each year, November 11.

The American Civil War of 1861 to 1865 claimed the lives of more than 550,000 people. During those years, many citizens began to place flowers on the graves of the war dead. Several Northern and Southern cities claim to be the originators of Memorial Day, but in 1966, President Lyndon B. Johnson pro­claimed Waterloo, New York, as its official birthplace.

In 1865, Henry Welles, a Waterloo pharmacist, suggested that the town formally set aside a day to honor those killed in the war. The following year, Waterloo held the first formal observance of a day dedicated to honoring the war dead.

In 1868, John A. Logan, a former Civil War general and founder of an organization of war veterans, extended the idea by suggest­ing May 30 as an annual date to remember the massive numbers who died during the turmoil of the divided nation. Called “Decoration Day,” it is believed the date was chosen because flow­ers would be in bloom all over the country.

By the turn of the century, nearly every state had declared “Decoration Day” an official holi­day. After World War I, Decoration Day was expanded to honor those killed in all of the nation’s wars, and after World War II, it became known as Memorial Day.

Among the ceremonies held on the first Decoration Day was one at Arlington National Cemetery in Virginia, across the Potomac River from Washington. President Ulysses S. Grant presided. After the speeches and tributes, thou­sands of war orphans, veterans and others decorated the graves of the Civil War dead. There were more than 20,000 such graves at Arlington Cemetery alone.

This tradition continues. The U.S. president or vice president typi­cally presides at a Memorial Day ceremony at Arlington National Cemetery outside of Washington and places a wreath at the Tomb of the Unknowns, also known as Tomb of the Unknown Soldiers. In the evening, the National Symphony Orchestra performs a free patriotic concert on the front lawn of Congress. Solemn observances also are held at Civil War battle sites, including Gettysburg, Pennsylvania, and Sharpsburg (Antietam), Maryland.

Meanwhile in Waterloo, the fes­tivities include a parade, a crafts show, a strawberry festival, music, tours of the town’s Memorial Day Museum and an antique car show. Civil War buffs in period uniforms and dresses hold a two-night encampment in a city park and present a live cannon-fire demonstration. Many Southern states also have their own days for honoring the Confederate dead.

In 1971, Congress established Memorial Day as a federal holiday and fixed its observance on the last Monday in May.