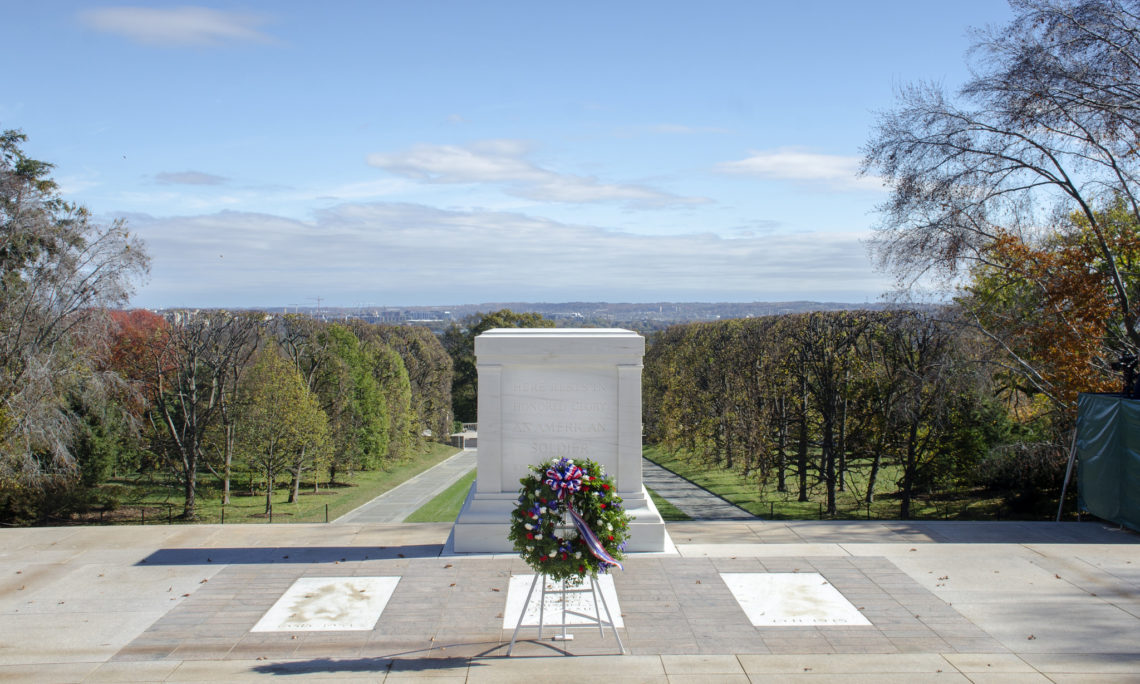 November 11 is Veterans Day in the United States, and parades, ceremonies and tributes to veterans and their families are planned throughout the country to honor those who have served, and are currently serving, in the U.S. military.

This year, as always, the memorial amphitheater built around the Tomb of the Unknowns in Arlington National Cemetery, just outside Washington, remains the focal point for national Veterans Day ceremonies. The traditions are firmly established: A combined color guard representing all military services executes “present arms” at the tomb, the president lays a wreath, and a bugler plays “Taps,” the haunting bugle call used at U.S. military funerals.

In 1958, two unidentified American war dead, one from World War II and one from the Korean War, were buried in Arlington National Cemetery alongside the Unknown Soldier from World War I. In 1984, an unknown serviceman from the Vietnam War was placed beside them. They symbolize all Americans who gave their lives in all wars. (The remains of the Vietnam Unknown were exhumed in 1998; he was identified through DNA testing and reinterred in another cemetery. Since then, that crypt has remained vacant.)

The earlier, more narrowly focused Armistice Day commemorated the end of fighting in World War I under the armistice implemented at 11 a.m. on November 11, 1918 — the 11th hour of the 11th day of the 11th month. President Woodrow Wilson proclaimed the first Armistice Day a year later.

In 1938, Congress designated Armistice Day a legal holiday, dedicated to the cause of world peace. But Wilson’s hope that World War I would be the “war to end war” collapsed with the outbreak of new fighting in Europe. The United States entered World War II in 1941.

Seeking to pay tribute to the 16 million Americans who fought in World War II (including 407,000 who died) and others who served the nation in any of its wars, Congress and President Dwight Eisenhower in 1954 re-designated the November 11 holiday “Veterans Day.” “Let us re-consecrate ourselves to the task of promoting an enduring peace so that their efforts shall not have been in vain,” Eisenhower wrote in his first Veterans Day proclamation.

In 2004, aging but proud veterans attended the dedication of the National World War II Memorial on Washington’s National Mall, between the Lincoln Memorial and the Washington Monument. The Korean War is commemorated with a memorial nearby, comprising 19 statues representing a squad on patrol. More than 54,000 U.S. soldiers died in the three-year conflict.

Dedicated in 1982, the Vietnam Veterans Memorial — also on the National Mall, near the Lincoln Memorial — features two polished black granite walls inscribed with the names of more than 58,000 U.S. service members killed or unaccounted for in the Vietnam War.

In 1993, the Vietnam Women’s Memorial was dedicated. It is located a few yards from the main Vietnam Veterans Memorial and depicts three women, including one who is caring for a soldier. Nearly 2.6 million men and 7,500 women served in Vietnam; more than 83 percent of the women were nurses.

As of 2010, there were 22.4 million veterans in the United States, according to the Census Bureau.

One of the highlights of recent Veterans Day parades in New York has been the appearance of the Navajo Code Talkers, who performed a unique role in the U.S. military during World War II.

As young Marines on the battlefield, these bilingual Native Americans transmitted secret military communications using a code they developed that utilized their Navajo tribal language. The Navajo Code Talkers created the only unbreakable code in modern military history, saving countless lives and hastening the war’s end. They served with distinction in every major engagement of the war’s Pacific theater from 1942 to 1945.