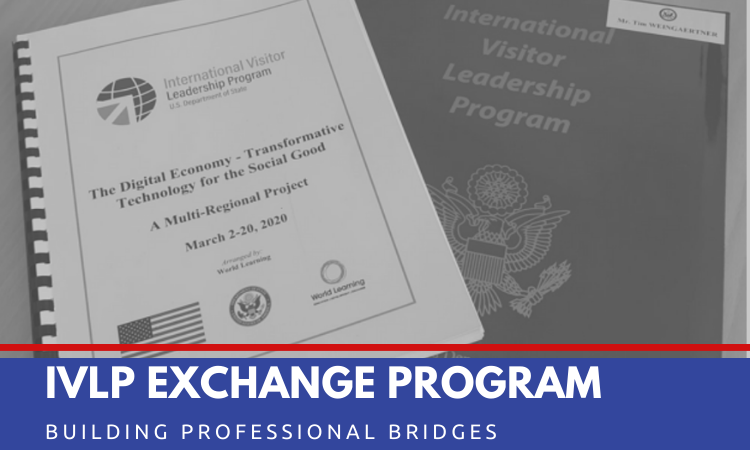 The IVLP (International Visitor Leadership Program) is an “on invitation only” program by the U.S. State Department with each group having a special topic and visiting selected spots in the United States. I had the honor of being invited to the IVLP 2020 with topic “The Digital Economy – Transformative Technology for the Social Good”. The goal of the program was to learn about digital economy and innovations in the U.S., meet with advocate, start-ups, investors and contributors, and learn about blockchain projects and the impact of crypto currencies on national economies. Our group consisted of 18 participants from 16 countries.

The following report summarizes the main lessons learned from my visit in the USA. From the numerous presentations and meetings, I picked the most important regarding blockchain technology. This selection reflects my personal opinion on the contents.

Objective of our first stop in Washington D.C. was to get an impression of federalism in the U.S. and its impact on digital economy. I would like to highlight two meetings our group was attending.

Bill Rockwood gave an overview about the “Congressional Blockchain Caucus”, an initiative by the Congress to educate legislators and raise awareness about blockchain technology. He pointed out the importance of telling real stories and use cases about how the technology helps to solve problems, instead of technological details – a mistake many experts do when talking to politicians. Libra helped a lot to raise awareness even if this was definitely not on the positive side. One difficulty he encounters is the broad application of blockchain. Therefore, it does not fit in one resort like taxation or food tracing which makes things complicated.

In another meeting we had a presentation from Stephen Ezell and Michael McLaughlin from Information Technology and Innovation Foundation (ITIF.org) about emerging trends in innovation and technology policy. We discussed the fact that data is non-competitive unlike oil which is a competitive good. It can be duplicated without any costs and multiple companies can collect, share, and use the same data. Due to this fact the value of data is hard to estimate. Another interesting fact they came up with is that agricultural production has to rise by 70% by 2050 to match the nutritional requirements of humanity. Interesting reports from ITIF can be found on their webpage: https://itif.org/

By bus we reached our next destination: New York, where we learned more about leveraging blockchain technology for social impact.

With Prof. Arun Sundararajan from New York University we discussed the “problem of transition”. In his opinion digital transformation was managed very badly so far. It just “happened”. Several government owned and regulated processes like just post or phone have been transformed without conscious decision. Regulations like postal secrecy or phone secrecy vanished. The questions arise: “Have we delegated too much?” Many governments are reacting instead of planning a transition for their population. And the workforce of the future will have to face new jobs and job models.

Cameron D’Ambrosi and Simeon Beal from One World Identity shared valuable insights about the importance of identity in a digital society. One big issue today is that identity is national. Therefore, launching a global identity system is hard to reach. They also shared the five important aspects of identity: creation, verification, authentication, authorization and federation.

After New York and of cause a musical visit on Broadway the group split up into three sub groups traveling to three different locations: Burlington, Vermont, Chicago, Illinois and Detroit, Michigan. I attended the last group to Detroit.

Arriving on a Sunday in Detroit is somehow shocking. The city consists of seemingly thousands of parking garages and parking spaces, all empty. We had reached the hot spot of U.S. car industry. Monday morning this impression was washed away. Nearly all parking spaces were well filled. We attended several meeting in Detroit and as before I picked two. The meeting with Detroit Future City gave us an impressive introduction in the latest history of this town. Since the city reached its lowest point in 2010 with the automotive crisis the city has recovered slowly. A 50-year plan is in place and citizens are encouraged to come up with innovative solutions to improve communities and unused space. An ambitious and long term goal built on small steps.

Nate Talbot from Detroit Blockchain Center showed us one of those community driven initiatives: The Detroit mesh network a blockchain based wireless internet mesh net. Built on open source and existing router infrastructure the project’s goal is to provide internet access to unconnected households in a neighborhood. It is run as a DAO (Decentralized Autonomous Organization) by the community members including payment by a crypto-currency. The non-profit organization provides support, software and know-how.

It has been impressive to see the community cohesion and the countless non-profit initiatives which arises from a crisis situation. This impression was reinforced during our homestay evening at a local household, which was a marvelous experience.

Dallas was intended to show us more about regulating the new digital economy and further use cases of blockchain technology.

Gurvinder Ahluwalia from Digital Twin Labs drew the bow over actual technologies and their convergence. Important statements were: “You have to explain disruption through economics and not through technology” where cost of transactions is the relevant unit. Or “you don’t need government but governance” highlighting the fact that we observe a shift from institution to functionality. Blockchain technology plays a central role in this transformation since it enables autonomous behavior. Suddenly cargo tells you where it goes, not the logistic company or the delivery note. Again, identity is crucial and change of identity possible. Why can’t any vehicle become an emergency vehicle, as any car can become a taxi via Uber? One impressive suggestion was to organize regulation as a hackathon. Give a problem to teams, investigate solutions, and try them in a “sandbox.”

Unfortunately, the looming COVID-19 crisis escalated during our stay in Dallas. We were able to attend some meetings at our first day but several had already been moved to virtual video conferences. On the evening of March 12th President Trump enacted travel restrictions for citizens of European countries. The International Visiting Leadership Program was terminated and all 18 members traveled individually back home. Fortunately, all had a safe trip home, although some of us had a very long journey, taking over 48 hours to reach family.

Beside the informative and well-planned meetings with all experts, the interaction with all the exciting personalities of our group was a real highlight. Even if we only had two weeks we grew together as team and learning about all 16 cultures was impressive.

At this point I would like to thank my 17 co-participants for their insights and the valuable discussion. A big thank you to our three liaisons, Aggie, Elka and Rene, for their huge and unwavering support. And finally, I would like to express my great gratitude to the team from the U.S. State Department and World Learning as well as the U.S. Embassy Bern who made this experience possible for me.