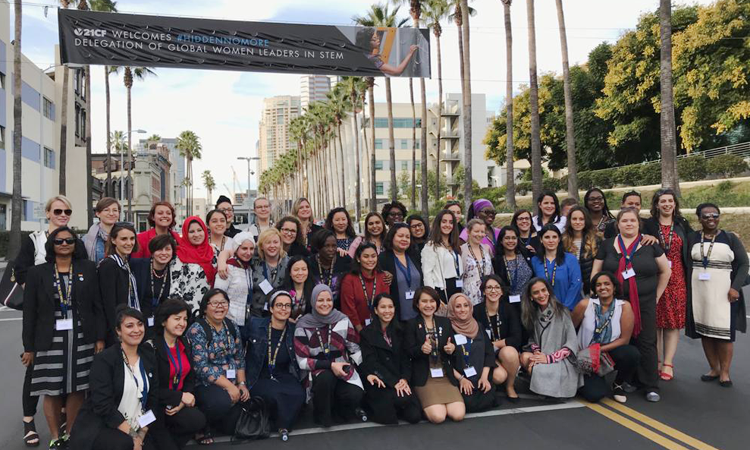 In October 2018, Marion Schleifer, a freelance software developer and community organizer from Switzerland, participated in the three-week IVLP exchange program #HiddenNoMore designed by the U.S. Department of State. The award-winning film Hidden Figures inspired viewers across the world as well as an International Visitor Leadership Program (IVLP) that brought 50 women leaders who represent “hidden talent” in their home countries to the United States to explore U.S. efforts to prepare women and girls for careers in science, technology, engineering, and math (STEM).

The program started with a city tour in Washington DC and with an introduction of all 50 participants. Marion met women from all over the world working in different fields such as aerospace engineering, government, film, the textile industry, etc.– all leaders in their communities.

In the U.S. capital, the participants visited the Applied Physics Laboratory, National Geographic and National Academy of Sciences, where they had the occasion to meet women in high-ranking positions. They held round table discussions in order to exchange best practices from their own institutions and countries, and also learned about the importance of good leadership and career development.

After Washington DC, Marion travelled with a smaller group to Charleston, South Carolina, where she was able to see how science and technology flourishes in smaller U.S. cities. The group visited Porter Gaud School, where children are educated in computer science from an early age. “This school visit was such an inspiration for all of us,” remembers Marion. “I have never seen a school like this one.”

A highlight of the trip for Marion was the visit to the Massachusetts Institute of Technology (MIT) in Boston. There, women professors and researchers shared their experiences getting accepted to and working/studying at MIT with the group.

The final stop of the program was Los Angeles, where visits to Studio School Los Angeles and 21st Century Fox were on the program. 21st Century Fox was Marion’s favorite visit of the entire trip. She attended a panel discussion that included four of the IVLP program participants. They shared their insights on work and challenges

they are facing in theirs countries. The day was rounded off by a reception. It was a great opportunity to speak with 21st Century Fox staff, as well as members of the Department of State.

After her return, Marion summarized the exchange program: “It was one of the most impactful things I’ve done in my life, and it made me grow as a professional and as a person. It was truly special to be in a group of like-minded women that are all having similar struggles. I felt a huge sense of belonging, and I am forever grateful for this experience.”

On February 11 – the International Day of Women and Girls in Science – Marion organized a film screening of “Hidden Figures” in coordination with U.S. Embassy Bern.