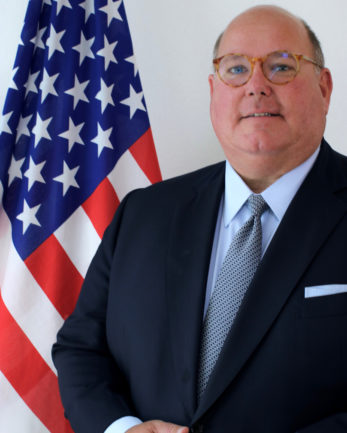 Ed McMullen was appointed Ambassador of the United States to Switzerland and Liechtenstein in November 2017.  He founded and was the President of McMullen Public Affairs, a corporate advertising and public relations firm based in South Carolina.  Ed also served as Chairman of his Family Investment Holding Company.  His extensive experience with foundations and think tanks include The Heritage Foundation where he served during the Reagan Administration.  He served as President Trump’s campaign chairman in the South Carolina primary and went on to serve in a volunteer capacity on the President-elect’s transition.  He volunteered on the U.S. and South Carolina Inaugurations.

Ed has served on the South Carolina Philharmonic Board of Directors, the South Carolina Preservation Trust, and numerous other community and philanthropic organizations.  He was National Vice Chairman of the Hampden-Sydney College Alumni Board of Directors.  The American Swiss Foundation selected him in 1995 to participate in its “Young Leaders” program. He has traveled throughout Switzerland since his youth.

McMullen holds a B.A. in Political Science from Hampden-Sydney College in Virginia.  He and his wife Margaret Ann have two adult children, Thomas and Katherine.