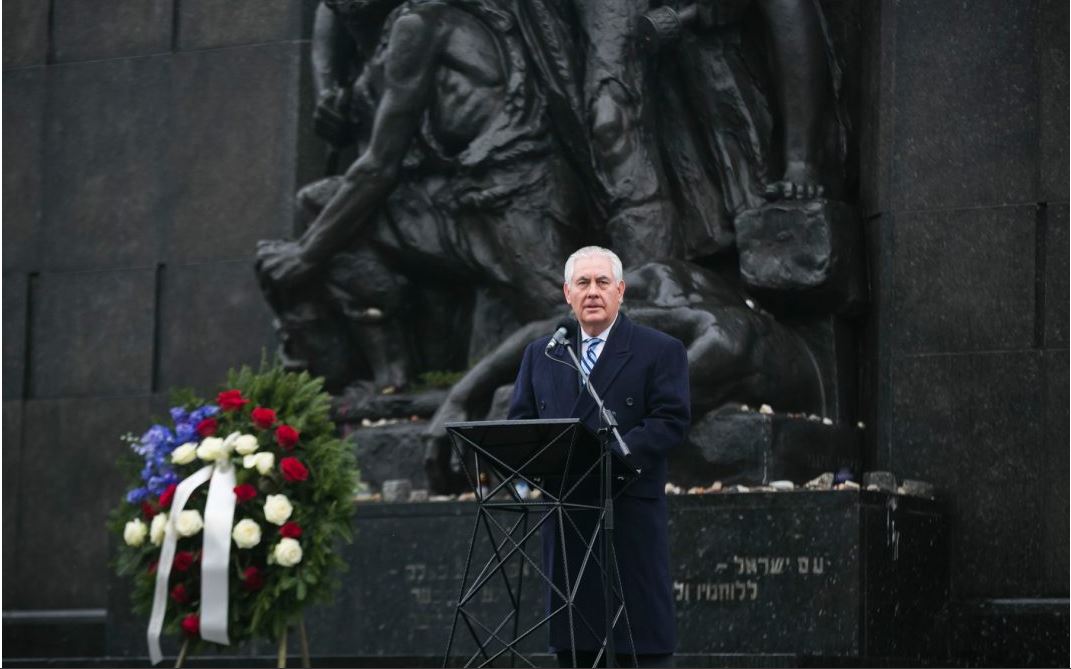 Secretary of State Rex Tillerson reaffirmed the U.S. commitment to its alliances in a weeklong trip to Europe, where the U.S. helped launch a global effort to stop governments from using chemical weapons.

Tillerson wrapped up his trip January 27 in Poland, where he laid a wreath at Warsaw’s Ghetto Heroes Monument (above). “We can never — we can never — be indifferent to the face of evil,” he said at the event, which commemorated International Holocaust Remembrance Day and the 73rd anniversary of the liberation of Nazi death camp Auschwitz. “The Western alliance which emerged from World War II has committed itself to ensuring the security of all, that this would never happen again.”

Here are the highlights from the secretary’s January 21–27 trip:

In his first trip to Poland as secretary of state, Tillerson commended the country for its efforts to strengthen NATO, including committing 2 percent of its gross domestic product to defense, and for its support for Ukraine’s efforts to regain its sovereignty.

Both Poland and the U.S. have concerns about a proposed pipeline in Europe that Tillerson said undermines Europe’s overall energy security and stability and “provides Russia yet another tool to politicize energy.”

The secretary noted the U.S. and Poland share a long history. “As we’ve done in the past, the United States is proud to stand with the people of Poland today, and we will be doing so in the future.”

The secretary joined President Trump in meetings with world and business leaders during the World Economic Forum in Davos, Switzerland. “America is open for business,” President Trump told the leaders gathered there January 26.

In Paris, Tillerson challenged the world community to put an end to the use of chemical weapons as the U.S. on January 23 kicked off the International Partnership Against Impunity for the Use of Chemical Weapons.

The Syrian regime of Bashar al-Assad is suspected of gassing civilians with chlorine in Eastern Ghouta, a rebel-held enclave. The secretary said Russia shared responsibility for the Assad regime’s chemical attacks. “There is simply no denying that Russia, by shielding its Syrian ally, has breached its commitments,” the secretary said.

“We call on the community of responsible and civilized nations to put the use of chemical weapons to an end,” he said. “The people of East Ghouta are watching, and the rest of the world is watching as well.” More than 25 countries joined the partnership.

In London, Tillerson reaffirmed the special relationship between the United States and the United Kingdom. With his counterpart Boris Johnson, Tillerson discussed a wide range of themes, including the crisis in Syria, Yemen and the vital business ties shared by the two countries.

“We treasure this relationship, and I treasure Boris’s relationship with me personally, and the work that we do together on these many issues,” Tillerson said.

Johnson echoed the sentiment. Noting the two nations’ strong business ties, he said, “There is no other economic relationship like it.”