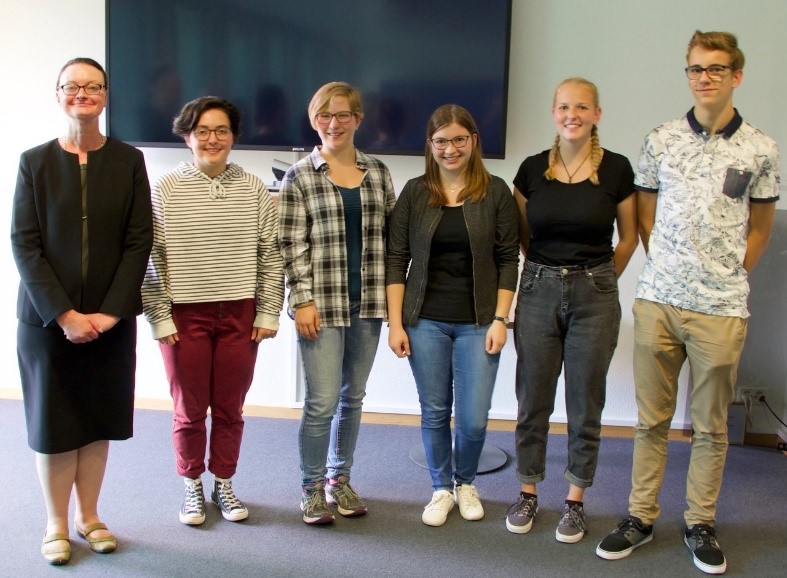 In July, a group of five Swiss students and their teacher from Kantonsschule Olten traveled to Kilarney, Ireland for the 2018 GLOBE Learning Expedition and Student Experience to present their scientific research projects to hundreds of other international students and scientists.  They presented two environmental research projects and were one of the few groups invited to participate in a story-telling program designed to help scientists better communicate their research results to the average listener.

In an effort to support GLOBE-Swiss and the educational programming they offer to young student scientists here in Switzerland, the U.S. Embassy’s Deputy Chief of Mission (DCM) Tara Feret Erath hosted these students and their teacher at the Embassy on September 6th where they presented their fascinating projects to student scientists, teachers, school administrators, GLOBE-Swiss representatives, and U.S. Embassy staff.

GLOBE-Swiss President Mr. François Gingins kicked off the event by explaining the programming GLOBE-Swiss offers here in Switzerland.  Did you know that student scientists not only share their measurements and research findings with other students and scientists from all over the world, but they contribute data directly to NASA?  Check out this special shout out to GLOBE students from U.S. astronaut Ricky Arnold from the International Space Station.

DCM Erath also had the opportunity to speak to the group.  She spoke about how GLOBE programs advance a number of U.S. foreign policy priorities including showcasing U.S. science and technology innovations, improving understanding of the environment, promoting English language learning, empowering women and girls, and engaging populations in priority geographic regions including promoting positive interactions in conflict-prone regions.  She also answered lots of fun questions about life and work as a diplomat.

GLOBE International is an international science and environmental studies organization, offering educational programming in 121 different countries.  It is supported by the U.S. Department of State, the U.S. National Oceanic and Atmospheric Association, and the U.S. National Science Foundation and is sponsored by NASA.  The Swiss chapter of GLOBE is under the supervision of the Bundesamt für Umwelt (BAFU) and has member schools in 24 of Switzerland’s 26 cantons.  GLOBE connects students, teachers, scientists, and citizens from different parts of the world to conduct real, hands-on scientific experiments about their local environment and helps them put this in a global perspective by contributing to worldwide environmental analysis.

The U.S. Embassy in Bern is proud to support GLOBE-Swiss and the scientific programming it provides to aspiring young scientists across Switzerland.  If you would like to learn more about GLOBE-Swiss, please check out their website or visit them on Facebook.