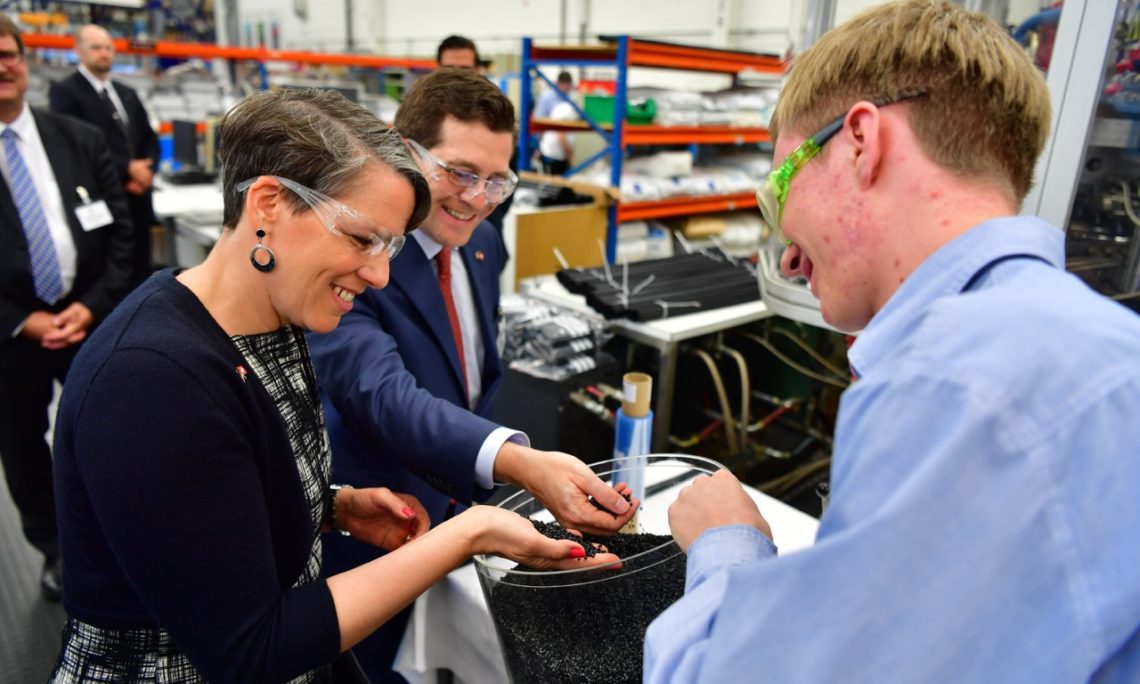 Since the dawn of our democracy, the American Dream has been about opportunity and the fact that anyone from anywhere in society can pursue and achieve a life where they are safe to live, love, and be happy.

What I love about this is that we’ve also exported this as a global dream!

But in the United States, basically since WWII, the paths to that Dream have narrowed to a single route and formula that requires a university degree (and a house and car) – a path that is getting more and more expensive and, frankly, doesn’t necessarily equip our nation with all of the skills we need for the future. Note: unfortunately, we’ve exported that sentiment too, so that more and more nations foster attitudes among their young people that a university degree is the only key to their futures – including here in Switzerland.

While this formula has served our nation relatively well in the past, we need to open up more paths to that Dream in order to continue to be the economic and innovation leader that we are. Our overall unemployment is an enviable 4.9%, but our youth unemployment is almost double that. Add to that the fact that many students leave university in the United States with no skills, no job, and a heck of a lot of debt. We also have anywhere from 10-20% of young people who drop out of high school – and it’s not because they are unintelligent. In many cases, it’s because that mode of learning doesn’t work for them!

Over the course of this election, we have also heard tremendous anguish from people who are still not benefiting from the recession recovery and who are feeling that dream slip from their grasp.

But we are at an incredible inflection point of opportunity.

In the United States alone, we have about 6 million jobs currently unfilled – really great jobs ranging from software developers to engineers to health technicians and beyond. And, while there are some who are ringing alarm bells about jobs going overseas, the reality is that most of those jobs are not moving out of the country. Those jobs went away with the advent of technology – but that technology has opened up new jobs. For example – robots have replaced dirty and dangerous jobs in many factories – but now require more people skilled as robotics engineers to program and maintain them!

Thus, we shouldn’t wring our hands and work to bring those (now) fictional jobs back. We need to rethink how we educate and train (and then re-educate and retrain) our citizens for these new jobs. This is especially relevant given the extraordinary and insatiable pace of innovation we are seeing coupled with our improved health and longer lifespans.

It is time for us in the United States to recognize that which you here in Switzerland have known for some time: that we can have many paths to success and the American Dream, and they don’t all start with a college degree! And it is incumbent on business, government and society to do everything possible to open up those paths.

One of those key new paths is something you all know well here in Switzerland. It’s apprenticeship – a whole new – and yet extremely old – way to gain knowledge and skills through practical experience and learning that puts people into the positions rather than taking a theoretical approach. It also contributes to their maturity and citizenship by giving them responsibility and a paycheck. For example young people doing a commercial apprenticeship don’t just learn the math behind business accounting, they do it as a part of their apprenticeship job. They don’t just study in a book how electrical circuits work, they build the circuits with their hands.

I believe that an Apprenticeship Renaissance in the United States is a key to our long term economic growth and, more importantly, is the key to more people than ever achieving their American Dream!

The really great news is that this Renaissance has already started in the United States – especially with the help of partner countries and companies who deeply understand and benefit from apprenticeship.

In Switzerland and Liechtenstein, as you know, a robust apprenticeship model in which almost 70% of young people do apprenticeships instead of high school in a diverse array of positions is a key contributor to an overall 3.3% unemployment rate and a 2.9% youth unemployment rate. The country also has among the highest GDP per capita in the world and ranks as the 2nd “happiest country on Earth”.

You can see – in the 2 pager in your hands – all of the highlights of this profound ecosystem that I’ve synthesized from my meetings with hundreds of companies, organizations and apprentices over my time here. Two of my favorite stats are the ones about the cost to the cantons or states: at 25K and 14K respectively, apprentices are 40% less expensive than high schoolers for the cantons and that the business/canton/federal government funding breakout is 60%/30%/10%!

There are also more than 250 different positions ranging from software developers to commodities traders to mechanical engineers to waiters to cheesemakers to robotics engineers to bankers to office managers. And more. And because they’ve designed the system to be fully permeable, if, after you’re done your apprenticeship, you then realize you want to go to university, you can. Many CEOs and other executives here started their careers as apprentices. In fact, two of the 7 members of their Federal Council (the 7 person equivalent of our Presidency) started as farming apprentices!

In the summer of 2015, recognizing the opportunity to learn from this model and adapt it to the United States, we signed a joint declaration of intent with Switzerland to collaborate on apprenticeship. At the same time, over 20 Swiss companies agreed to bring and/or expand their robust model of apprenticeship to their United States facilities. These prestigious partner companies range from Nestlé to Zurich Insurance Group to Pilatus Aircraft Manufacturing to Mercuria Commodities Trading and Bühler Corporation and more. Many are already getting great traction:

But I want to actually be even more prescriptive on what you all can do – especially those of you in state government, or at corporations:
To accelerate this Apprenticeship Renaissance, here are some recommendations to truly build this out and equip us with a system that will define our economy into the 22nd century!

In the meantime, we will be making one final big push for it to become standard operating procedure for Swiss companies to do apprenticeship in the US and for US companies doing it here to bleed it back into their U.S. facilities.

Ultimately, when this system is running smoothly in the United States, it will be great for our citizens, great for our government, and great for business. Young people will be able to choose how they want to gain the skills for their futures; the middle class will have another engine of growth; businesses will have an incredible pool of talent; the United States will become even more attractive for foreign direct investment; and people later in their careers will have an established system for retraining and pivoting to new industries as innovation phases out some positions and introduces new ones.

Thank you, in advance, for the part you all are going to play in this!