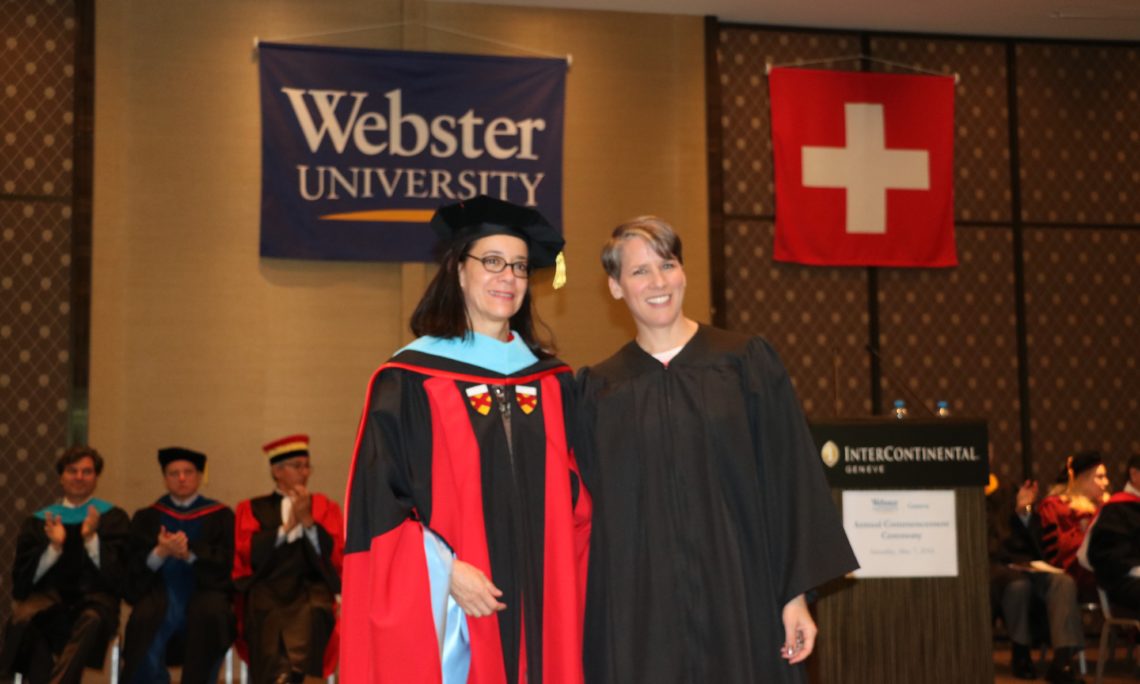 Thank you so much to Academic Director Dr. Ron Daniel, the Board of Directors, and, of course, Webster Geneva’s director Dr. Clementina Acedo for the invitation and honor to be here with you here today!

To the 137 new graduates and your family and friends who are here today – congratulations!

My name is Suzi LeVine and as was just shared, I’m the United States Ambassador to the Swiss Confederation and the Principality of Liechtenstein. And these are my two children – Sidney and Talia.

My initial plan was to come here today and share with you why today is the best day ever to be alive – and not just because it’s your graduation day.

Across the globe, people have more opportunities and more personal well-being than they ever have in the history of humanity.

If you look at the bigger picture – and not just your Facebook feed – you’ll learn that.

I believe that, not only can we continue these positive trends – but we can also take on other major global challenges that threaten our safety and our quality of life– especially if we act both together and as individuals.

Like I said a moment ago, I had planned to really go in depth into that information and fill you with feelings of hope and inspiration.  But then I realized that, while I want to share with you these statistics so that I can inform – and maybe even inspire you, I also want to arm you so that you’re better equipped to take all of those points to the next level.

In order for you and everyone else out there to avail yourselves of the opportunities and well-being I just outlined, you need to be ready to take on something subtle but powerful that still lurks among us and that can keep each of us from being the best we can be. Worse yet, if we are unwitting participants, it can also stymie each of us from empowering and supporting those around us – keeping them, too, from reaching their maximum potential.

Fellow humans, what I’m referencing here and want to isolate and – ideally help stamp out – is Unconscious Bias.

There are many books about this – but to really bring it home, I want to get personal with you – because, despite my now serving as Ambassador and having the President of the United States as my boss, I have been the victim of Unconscious Bias many times in the course of my non-linear career. To best equip you, I will share and deconstruct with you five very personal stories of Unconscious Bias that I have experienced in my life that, I hope, can be instructive for you. While enduring these perhaps made me stronger, there are ways to get strong that don’t have to come from suffering from bias. My experiences are based on Gender bias, but as you process these, please recognize that they could just as easily have been about racial, sexual orientation, or even religious bias.

Now – Dr. Acedo – I hope you didn’t invite me here today to be a conventional commencement speaker – one who talks at the graduates and their families – because if that’s what you were hoping for – I’m sorry to disappoint.  Instead, I am more of an interactive commencement speaker and, right now, I’m going to ask for your – and everyone else’s help with my talk.

I would like each of you – faculty, students, families, even my own kids – to raise your hand if you’ve ever had a teacher who really inspired and moved you – one who might even have changed the course of your life. Please keep your hands up. On the count of three – I’d like each of you with your hand up to shout out that teacher’s name as loudly as you can. One Two Three…

The next big lesson I learned – or the second big experience I had with Unconscious Bias was – well when I was standing where you will be in just a moment. During my University studies, there were a couple of times when I had raised concerns with my thesis advisor – who happened to be the Dean of Engineering – about sexist aspects of various textbooks or comments from professors. Thus – he knew that I was (and I still am) a feminist. Because we had worked closely together on my thesis, I was really looking forward to receiving my degree from him at the graduation. So there I stood, nervous but excited – kind of like I assume many of you will be shortly. But then, when he announced my name he said “And now Suzi Davidson – a nice little girl”. I had worked hard, performed well, and earned the respect of my faculty – and here I was in my moment of glory, being demeaned by the head of the department. I filed a complaint with the school and ultimately received a reluctant apology but that didn’t take away the sting. I knew he wasn’t being malicious – he thought he was being funny – but it wasn’t even close to funny – and, to this day, that moment for me has been tarnished.

We’ll fast forward 12 years to 2005 for the third instance of Unconscious Bias. I had been working at Microsoft for 5 years and then Expedia for 6 years and was about 7 months pregnant with our second child. The previous 8 months at work had been absolutely grueling. Our business wasn’t going as planned and, as our Vice President of Sales and Marketing, I needed to get the business back on track. I drove my team and the teams with whom I worked very very hard – probably harder than they ever had in the past. We created outstanding solutions and got excellent results. So, when I had my review with the division President, I expected to hear very positive comments. Instead, he basically told me I was on the verge of being let go. He shared with me that, while we had gotten good results, it had come at the cost of burning out the team. Thus – he wasn’t sure things would work out for me any longer.

Like I said before, the company wasn’t really interested in my coming back from my maternity leave – so I didn’t. I left paid work in 2005 and ended up staying home with my kids – and creating a couple of non-profits and becoming a community organizer. And then, in 2009, when I was trying to return to the workforce, I experienced my fourth bout with unconscious bias. It turns out that a lot happened in those four years when I was home with my kids in the communications field (the area in which I had been working). Specifically – social media – had come onto the scene. Unfortunately, I hadn’t done it professionally, but had certainly done it personally – and even on a volunteer basis with the community organizing I had been doing. However, when I spoke with a recruiter about a job I really wanted, he said that he wouldn’t interview me because I didn’t have the required social media skills.  I said to him “Really?  It’s not rocket science, and I have a rocket science degree!”  He laughed – but still said he wouldn’t interview me. As I look back on that now, what I realize is that it was a very classic case of a company not knowing or thinking about how to leverage women entering back into the workforce – a sort of institutional unconscious bias. Plus – I was incredibly truthful and humble with my resume and undersold my skills. Research shows that women frequently understate their skills in their resumes and men frequently overstate their skills. Thus – when evaluating resumes, it’s easy to pass over the women.

My last and fifth anecdote is what I call “upside down unconscious bias”. In order for me to do what I am doing here as Ambassador, my amazing partner – my husband – who is an entrepreneur and has his own Internet business – is now also a stay at home dad. But what he and many other men who are enabling their spouses to break through the glass ceiling experience is reverse bias. People don’t recognize nor acknowledge the legitimacy and importance of their roles. School still tries to reach me if something comes up with the kids – even though he is the first number on their list; he doesn’t get invited to the spouse gatherings because they’re ladies lunches designed for wives, or – worse yet – family and friends go up to my mother, who lives with us, and thank her for raising our children for us – completely ignoring my husband’s contribution. While she certainly does a great job watching them on occasion, my husband is now the primary care giver and deserves enormous amounts of credit for what he’s doing to take care of them – AND me! This inability for society to recognize and support his role makes it harder for me to do my job. And I know that those sets of people – the school, the spouse group coordinators and our family and friends – again – mean no harm! It is simply that they have a very specific bias and set of standards in their heads as to what a man does and what a woman does.

So the lesson here is to make space for people to make their own life choices, regardless of gender, race, sexual orientation, or religion.

My experiences have taught me so much – frankly, much of it in hindsight. I’ve learned that, to fight unconscious bias, we can’t accept when people

When I think back on those five experiences with Unconscious Bias over the over the course of my life, I know that every one of those people I described in my stories is a fine individual – and meant absolutely no harm. In some cases, they were even just simply doing their jobs. In most of those cases, they were just like you and me. But that’s what makes it even more important to be conscious of how we treat and think about each other. As future leaders, you have an obligation to not perpetrate Unconscious Bias – just like you don’t want to be a victim of it.

And as I look around at this incredibly diverse and thoughtful room full of graduates, family members, friends, and faculty. I have faith that you are not only up to the task – but that, as you go forth into the world – you will blow away even our highest expectations at making the world a better place.

Congratulations class of 2016 and may you foster a world of respect, fairness, and well-being now and into the future!