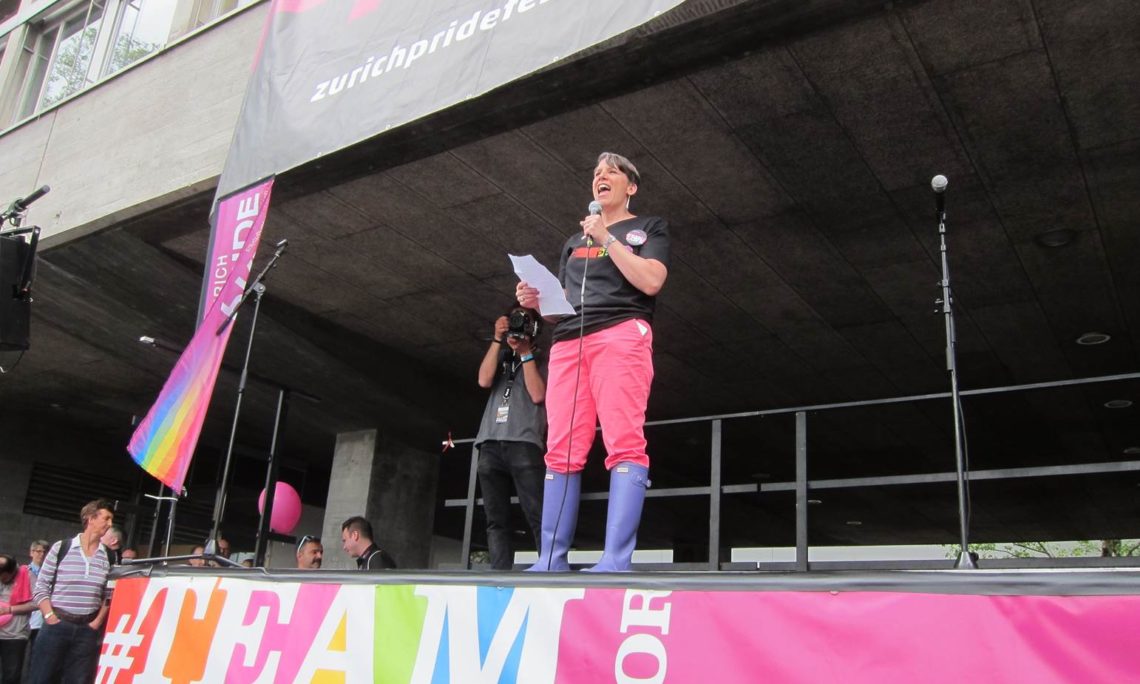 Thank you Zurich Pride for the invitation to be here today to address this amazing group!

In the fall of 1995, I moved in with Eric LeVine. We were 26 years old, unmarried and happy as could be – especially since he was (and is) a great cook and I am a great eater!

By the spring of 1997, we bought a house together. Signing a mortgage felt like an immense commitment – something that truly bound us together. But neither of those milestones compared with the moment I woke up on September 8, 1997, the morning after our wedding. The world had changed, colors seemed brighter, sounds more harmonious, and emotions more intense. I never imagined that a simple exchange of vows and signing of legal documents would have such a profound effect. But they did.

I love Eric LeVine – my husband. And we, together, love our two wonderful children and our very sweet dog.

And basically since the beginning of the United States, U.S. law has made sure that we have the right to legally bind our love in marriage.

Last year, just a few days after Zurich Pride 2015, the United States Supreme Court ruled that EVERYONE in the United States has that same right to become married in the eyes of the law – regardless of who they love or whether the person they love is the same sex or not.

Additionally, earlier this year, the United States Federal Court also ruled that it is legal for any couple, regardless of their sex, to adopt children.

Love for the whole family WON this past year in the United States!

So now – friends of mine like Larry Nicholas, who, along with his husband Tom, also has two amazing children and a sweet dog, can also have their marriage recognized throughout the United States – and any couple who wants to adopt can now do so!

I am so proud to represent the United States – a country where Love Wins – and am also profoundly moved to have representatives of other countries here today who agree – including:

On behalf of my family and this auspicious group of diplomats, please know that we are humbled and honored to be here with you today in Zurich to support Switzerland’s Team for Love!